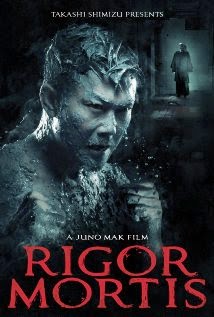 Blending genres of film can be a chancy maneuver for any filmmaker. When you’re successful it’s impactful. When you’re not, it’s a clusterfuck. Going into Rigor Mortis I had my qualms. Could the combination of Juno Mak and Takashi Shimizu really produce a film about Chinese hopping vampires and J-Horror popping ghosts that would be as awesome as it sounds? They sure as hell did. Rigor Mortis is one of the most unusual horror films I’ve seen in years and the combination of two countries worth of horror trends is a sight to behold. It’s quirky, brutal, and massively entertaining. Not only is Rigor Mortis one of the best horror films of the year, it’s one of the best films, period.

Life has been a little rough for actor Chin (Chin Siu-Ho) and he’s decided it’s time to end it all. So he rents out a room in a shitty apartment complex where he can commit suicide. Unfortunately, he doesn’t quite get there because this apartment is filled with the supernatural and macabre. Twins haunt his apartment, there is a mother/son duo who randomly wander the halls, and let’s not forget the black magic practioner who has just created his own hopping vampire. With the help of cook/vampire hunter Yau (Anthony Chan), Chin is going to have to step up if he is going to put an end to all of these shenanigans.

To be perfectly honest, I’m not necessarily familiar with the entire Chinese hopping vampire film. I have yet to experience Mr. Vampire (a film that Rigor Mortis pays massive homage to with its casting) so going into this one I was a bit hesitant that I might not get what Juno Mak was throwing at me. Luckily, it never seemed to hinder my enjoyment of the film. Blending the hopping vampire aspects with some Japanese ghost elements, Rigor Mortis combines some very unique horror elements into one package. Using both subtle jumps and some more straightforward shock elements (gore aplenty and some wicked kills), Juno Mak slathers the film in brutal moments and some intense atmosphere with his rather unhindered visual work, which is beautiful as it is horrifying in many moments. Rigor Mortis is top notch in production values and Juno Mak uses them to their full benefit.

From there (this is where it gets tricky and might not appeal to as many people like it did to me) Rigor Mortis adds in some dark comedy and, believe it or not, some kung fu. The finale is packed with some hero vs. vampire kung fu trickery as is a somewhat humorous and quirky possession sequence where our vampire hunter and black magician have to team up to ‘exorcise’ the twin ghosts from our hero. This adds a bit to the humor, most of which is pretty dry and straightforward. I don’t think the vampire hunter/cook Yau wears a pair of pants for most of the film, for example. Both of these elements might not appeal to horror fan that is going out to purchase this, but for this cult cinema nerd it was impressively integrated into the film and worked to balance out some of the strong dramatic beats and heavy horror elements.

To say that this film ends up as an energetic ball of eclecticism is probably an understatement. It’s an odd combination of talents behind and in front of the camera that makes Rigor Mortis work, but it works in such an odd and brilliantly balanced way that I immediately hit play again when the film ended. For all the things that could have gone wrong with the blended genres, it works damn near perfectly here. Rigor Mortis gets the highest recommendation from me. It’s a blast through and through.