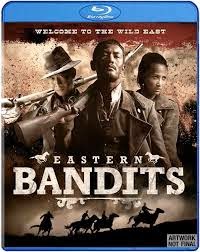 
Take it for what it is, but sometimes companies like to skew marketing for certain films to appeal to different audiences. Sometimes it’s thoughtful marketing and sometimes it can create expectations that do not match the film. For the case of Eastern Bandits (also known as An Inaccurate Memoir in most other places), it’s a marketing gimmick that didn’t do the film justice. The cover and title most certainly indicate that the film would be a western even going as far as to include a tag like “Welcome to the wild east” and a quote on the box that said it was an homage to westerns and martial arts. Well, let me set the record straight. This is not a western and this is not a martial arts film. Sure you could stretch the concept to a point where someone could argue there are western elements, but it’s not a western. It’s actually more akin to a war film then either of the above mentioned genres. Luckily, Eastern Bandits is a pretty impressive film overall to make sure I wasn’t completely sullied by the skewed marketing.


Gao (Zhang Yi) finds himself in a pretty bad position. The Japanese military that occupies the area want him dead as resistance towards them increases and a group of bandits have taken him hostage for ransom from a family that doesn’t exist. The choices seem rough. Escape and find himself hunted by the military or stay with bandits lead by their charismatic leader Fang (Huang Xiaoming) and face a future underground.


Eastern Bandits is a rather eclectic film in its tonality. The film is built on the foundation of a war film, but Eastern Bandits only really gets into those elements upfront in the last third of the feature. The first two thirds is dedicated to our lead (a questionable protagonist himself) trying to deal with and earn his way into the titular group of bandits. There is not a whole lot of action to be had with Eastern Bandits as most of the films more intense sequences are done like thriller sequences with streaks of black humor. Take the bank robbery scene. What starts off as an intense gangster bank robbery suddenly takes a turn for humorous as Gao attempts to get them out of a sticky situation. This is the kind of quick turns of tonality that director Yang Shupeng makes work even when blending genres like this usually gets films into more trouble than not.


Yet the brilliance behind this film is that, despite some of its more complex plot progressions and plethora of characters, the film is very character driven. While most of the characters thrive in a gray moral area, I felt truly compelled to root for their ‘redemption.’ This is sported by some phenomenal performances from leads and secondary actors alike. Zhang Yi and Huang Xiaoming both expertly navigate the subtle acting material and the supporting cast only adds to the fun and depth of the script. A gimmick character like Lady Dagger or Fang’s right hand man with the stutter come off as detailed people rather than caricatures. It’s very impressive.


Sure the film might be pushed forward by some unique writing and some cleverly executed tonal shifts, but Eastern Bandits rides on the strength of its characters and performances. It’s not going to be a film for everyone with some of its quirky moments and oddities of structure, but this reviewer was impressed with the strength of execution and the film’s willingness to take chances. It might not have been the western I was expecting from the initial marketing, but it was probably better in the end.