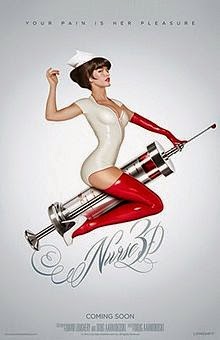 Looking back at the past five months of the year, it’s hard to say that it has been a stellar year in horror films. We’ve gotten a handful of home releases for films that hit Video On Demand late last year, but the new crop seems to be pretty thin as far as major films or even hyped ones goes. So when Nurse finally arrived in my viewing queue, I was stoked to see if this dark comedy slasher would have the balls to live up to the hype that surrounded its release. Unfortunately, it doesn’t. In fact, Nurse rarely scrapes by as something above a lowbrow slasher despite its seemingly big production values.

Abby Russell (Paz de la Huerta) is one of the nurses at a local hospital who clocks in and clocks out as one of the better employees that the place has to offer. She carries a few secrets though including her after hours activities… which just happen to be hunting down unfaithful married men and giving them their due punishment. Yet, a new young nurse (Bowden) becomes her new trainee and our killer nurse starts to unravel a bit as her hidden activities start to come to light.

The failure of Nurse happens in a few ways. Initially, the concept of a nurse who hunts down unfaithful men appealed to that grindhouse fan in me and the first ten to fifteen minutes of the film builds up this black comedy dryness that would have worked had they run with it. If only they had. Instead, Nurse decides to opt out of this storyline for a game of “my mentor is a deranged killer” which runs the cliché slasher formula into the ground. Nurse collapses into so many tired and predictable turns that rarely did I feel engaged at all with what was happening let alone attempting to fill in the plot holes so it could make sense.

While the film retains a lot of grindhouse elements including massive amounts of needless nudity (even I was blushing) and some substantial gore, it most definitely lacks the charm for it to work like films of similar style did in decades past. While the kills were generally fun, although uninspired, Nurse tries to cover up its muddled narrative with these elements. Sometimes this works, most of the time it doesn’t. Having Paz de la Huerta parade around in little to no clothes simply does not make up for the surface level characters and mediocre acting that is also being paraded around.

Perhaps the one aspect that should have worked the best was the use of Abby Russell as our voice over narrator. In an attempt to pull an American Psycho (or to a lesser extent Fight Club), Nurse really does try to give the audience a few twists by having an unreliable narrator. Like most of the rest of the film, it just doesn’t have the writing or charm for it to work. It lacks the swirling out of control effect of the previously mentioned films and ends up being something of an annoyance as she simply narrates what we are seeing on screen instead of stirring up mystery.

I’ve seen my fair share of terrible slasher flicks, I did review the entire Wrong Turn franchise, but Nurse is one of those films that despite some strong potential, utterly and completely collapses in on itself. The slasher elements are cliché, the dry humor is mostly left to die, and the grindhouse elements are there simply to cover up poor writing, phoned in performances, and two-dimensional characters. Truthfully, as far as 2014 goes, this is the biggest disappointment of the year.