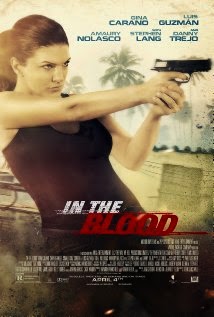 I’m not one to completely write off athletes that become movie stars. Most of my favorite action stars were at one point “professional” athletes or martial artists, in fact. After seeing Haywire, I had high hopes for MMA fighter turned actress Gina Carano. She had some decent acting chops and she was able to hold her own when needed with screen presence. Her turn as a glorified cameo in Fast & Furious 6 was not something to write home about, but then again it was basically a glorified cameo. For her latest film as the heroic lead, In the Blood, I went hoping for the best from the straight to DVD action flick. I definitely didn’t get the best when it came to a film though.

While basking in the fun and sun of their honeymoon on an island in the Caribbean, a freak accident leaves Ava’s husband (Gigandet) in an ambulance on his way to the hospital. When she arrives though, there is no record of him ever being checked in. He has simply disappeared. With her particular set of skills though, Ava (Carano) is going to find her husband and it’s not going to be without a little blood shed.

In the vain of many other action/thriller’s featuring a missing loved one like Taken, In the Blood slathers a basic mystery thriller with some beat downs and action set pieces for a modern audience. Unlike films like Taken, it has trouble doing so due to a script that meanders through the concept like a person lost in a dense fog in the middle of a forest. It bounces from moment to moment unsure of how to really fit it all together or build in the details to make the ‘mystery’ aspect work. Of course, it certainly doesn’t help that the acting is pretty horrendous throughout and Carano has approximately ZERO chemistry with her on screen husband, which makes the first third of the film drag out beyond belief. Sure Carano gets to throw down in a few fun sequences (a club dance goes awry and leads to a bitchin’ leaping punch courtesy of MMA training), but the acting and the script leave a lot to be desired for a good action flick.


So what does In the Blood offer for action fans? Despite some terrible acting, the film has a glorified cameo from both Treat Williams (Deep Rising) and Danny Trejo (Machete) that will have fans pleased overall. The film also has a pretty decent third act when we finally learn why all of these plot progressions went down, which in itself is a rather weak reason, but it finally introduces us to the villain of the film who steals every scene he is in and propels the film into a gun toting cat and mouse chase. At this point, I was actually enjoying what In the Blood had to offer, but alas it was too little and too late by that time. One good act, does not make a great film.

In an era where straight to home video action flicks have found their own path with fun and distinctive voices, In the Blood fails to be memorable in any way outside of disappointment. Sure it has some great casting and a fun third act, but the rest drags it down to the point where I almost didn’t make it to any of those elements. The acting is forced and awkward, the story leaps around erratically, and the film ultimately looks like it was shot to be a reality TV show. I’m all for low budget actioners with athletes in the lead, but even this one handedly missed the mark. Here’s to hoping that Carano moves up from here.