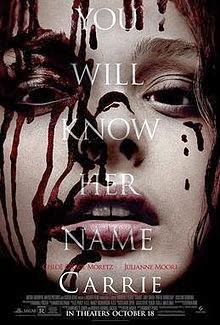 While the remake train continues chugging along as if there is nothing wrong conceptionally with modern cinema cannibalizing its own history, the amount of unnecessary films are becoming a bit ludicrous. Take this Carrie remake as a perfect example. Here we have a coming of age tale wrapped in angst, social commentary, and a bit of horror and yet they do almost nothing to make it unique from the original film. All the same beats, most of the same subtext, and even some of the same sequences. It’s close enough that never are we reminded that this is a new telling of the story, but sit there comparing it to the far superior original for an hour and a half.

That being said, I also don’t believe that Carrie is the shit storm of a film that many critics panned it as with their comments. It’s a decent little film with some solid enough performances and it gets the point across. Trust me, I’ve seen far worse than this. It’s just hard not to be tougher on films that are mediocre and forgettable instead of bad and unique. This latest incarnation of Carrie is most definitely the former.

Initially, I was sold with the casting. Chloe Grace Moretz has earned her own with strong performances in the Kick-Ass films and Let Me In. Partner that with Julianne Moore as her mother and the main two (and toughest) performances had some talent behind them. The problem then remains that never does the film rise above just going through the motions. Whereas the original Carrie had thick atmosphere and chilling moments, this one tends to be more of a standard affair. Moretz works some great scenes in the film, as does Moore, but the remaining cast tends to be a little weaker then expected and a drags the potentially heart wrenching moments of the film to a halt.


As the character Carrie starts to unravel her telekinetic powers, we are greeted to a lot of hit or miss CGI that sort of hurts the film too. Modern technology and a slightly bigger budget allows Carrie to show a bit more of the final act mayhem (even if seeing Moretz wave her hands around like a Harry Potter sequence is a bit humorous), but the film even seems to miss out on the emotional relevancy of what happens. In fact, the epic car wreck has almost a humorous vibe to it which kills the moment.

Carrie might be a slightly faster paced version of the classic original, but it’s hardly a match for the emotional punch and vulnerable performances. It tends to be more or less a film that simply retreads the same paths instead of taking chances and trying something new. It’s a decent film overall, but it’s hard to not compare it to the original. My final verdict: see the original and just skip out on this one.

Written By Matt Reifschneider
Posted by DarkReif at 11:08 AM