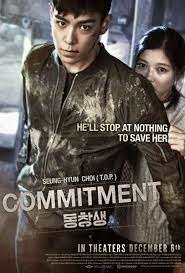 When it comes to rap artists leaping into the realm of film, don’t blame me if I’m skeptical. Outside of Ice T, it’s hard for me to claim that many rappers are able to make that jump. Well, that was until I saw Commitment. The young Korean rapper takes his turn as the lead in another riveting action/thriller from a place that knows how to make them and, despite my initial expectations, knocks one out of the ball park. All in all, Commitment is a great flick taking a surprise performance out of T.O.P. and using it as a launching pad for an emotionally packed ride.

As the tensions between North and South Korea continue to play their dangerous game the resulting turmoil in the North has made some rival spy networks in the South. T.O.P., as a rather wide eyed but focused young spy bent on offering his young sister back at home a life worth living, is sent to find a rogue assassin and put him down. Unfortunately, he has lots to contend with including his cover, the South Korean police force, a deadly assassin, and his own people.

When Commitment started rolling out this ‘kid spy’ routine in the first third with our lead having to deal with high school bullies and a girl that fascinates him while kicking ass at night and generally doing violent spy things, I was not impressed. This is a the kind of concept that gave us terrible TV shows like Alias or family friendly flicks like Agent Cody Banks. Yet director Hong-soo Park, in his directorial debut, takes this overused foundation and truly builds something worthwhile from it in the second and third acts. Along with an increasingly strong performance from T.O.P. that builds with the tension and chaos of the scripted issues that arise, the film goes for broke with action and some dark twists. Never does it feel like Hong-soo Park caters to the initial concept and instead focuses on crafting strong narrative story telling as we follow our hero into an increasingly hopeless situation. Partner that with a relatively effective and genuine romantic subplot that is spurred by a strong chemistry and a subtle performance by Kim Yoo-jeong and Commitment plays out as a rather efficient and emotionally driven story to woo even the harshest critic in me.

On top of those sturdy foundations of acting and a strong script, this thriller packs on some decent action as well. Hong-soo Park does tend to cater a bit too much to the shaky-cam modern style of shooting for my tastes and a oddly placed diamond smuggling thread at the end is out of place, but the rest of the action elements are perfectly synced. T.O.P. proves to be a worthy action star and the fight sequences are particularly set up well. An impressive fist to cuffs between our hero and the assassin is delightfully brutal and the finale is explosive to say the least. Even action fans are going to find a lot to love here.

Commitment is simply a film that had to earn its score against my expectations…and does.  T.O.P. proves to be a rather strong choice in the lead, the story is effectively emotional for a thriller, and the action is well paced and meaningful. This is the kind of Korean thriller we have come to expect and Commitment delivers on its title for the genre. A huge bloody recommendation from us.