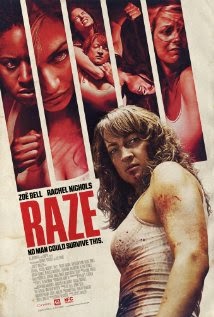 Far be it from me to criticize the ‘women in prison’ sub genre of the grindhouse cinema for being too exploitative, but truthfully it’s a premise that simply works on one level. That is until I caught Raze. While the concept and throwback look of the film with its simple sets and basic gritty feel certainly owes to the ‘women in prison’ genre, rarely does Raze fall into the trappings of its exploitative foundations and instead reinterprets them for a new generation of film fans who expect more out of their grindhouse experience.

In a sadistic tournament of sorts, a devious couple (Fenn and Jones) has created a kill or be killed game for 50 women to be enjoyed by the lush and rich. Sabrina (Bell) is one of those women. They fight to the death against one another, refusal to fight or failure to win results in one of their family members being assassinated so most of them have little choice in the end. Can Sabrina find a way out before she’s forced to kill too many people?

In the vein of what Tarantino has done with his homage films to grindhouse cinema, director and co-writer Josh C. Waller has taken the concept and lifted it to a realm where Raze is a little more accessible and serious in execution. Conceptionally the film is still a bit of a stretch as we learn about a family tradition of women killing women that seems to have no real meaning behind entertainment for the wealthy, a missed opportunity I felt to add something a bit more palpable to events of the film. From there we are introduced to a handful of women put into this dire position. We get to meet a slew of different characters of all kinds of personality, played with some impressive vigor by a rather remarkable supporting cast including the ‘villainous’ female fighter Phoebe who devours the scenes she is in. Yet, it’s easily Zoe Bell (known for her strong stunt work and leading role in Death Proof) that shines here as the heroine. While we get the idea that she’s not necessarily a ‘good’ person from some of the flashbacks and stories about her loved ones, she is the kind of anti-hero that you don’t mind following just to see them tear shit up against the greater evil.

From there the film only raises itself in execution. Waller is able to craft some decently atmospheric tension with very little before the film bursts into some super violent fight sequences. The minimalism of the sets and budget actually help with the gritty feel and 70s throwback elements of the film, which allows us to focus on what the film does best: ridiculously awesome fights. This is where Raze caters a bit more to its exploitative foundations. Brutal fist-to-cuffs occur in a small dirt floor and stone walled circle of death and all of the actresses seem game for whatever is needed here. Emotional impact can be found in damn near all the fights, a task not easy for many of these films, and by the time the last act arrives the viewer is ready to have Sabrina bring the entire fucker down brick by brick. One death in particular actually had me say “fuck” out loud. Waller most certainly succeeds in that aspect.

A few twists at the end seem a bit forced, but until then Raze moves at such a brisk and effective pace that rarely did I find myself criticizing the smaller details. It’s a strong blend of tension and brutal action that ends up being something of an impressive surprise for a film that I expected to be just a modernized ‘women in prison’ flick. A strong cast, a director that keeps it focused, and some very striking fight sequences make Raze one of the better action films of the year. It comes with a strong recommendation.