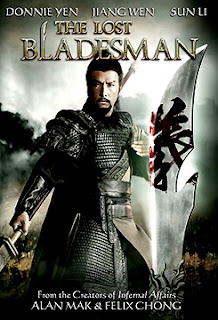 NOTE: Since the posting of this review, The Lost Bladesman has not gotten a US release from Anchor Bay. I must say that it's about time. I haven't edited my review of the film - including my complaints about how this film had yet to be released - for the sake of an update outside of the cover artwork. Just keep in mind that the film is now available on DVD in the US and I highly suggest the purchase.

Sometimes the international politics of film distribution baffle me, particularly when it comes to getting Asian films in the United States. Some films get edited to hell for American audiences (see Dragon), some films get ridiculously late releases (see Butterfly Swords), and in the case of The Lost Bladesman some great films never get a release…at least at this time. This last case is most certainly a shame as this dramatic action flick, or as I like to refer to them ‘dramaction,’ is pretty impressive overall. It’s not quite as artistic as say a Yimou Zhang film, but it’s a very strong blend of philosophical tones, dramatic pops, and vicious action set pieces.

Guan Yu (Donnie Yen) just wants the blood shed to end. When it comes to the massive civil war that is ripping through China though, that wish is a tough one to see come true. Devoted to the rebellion against the Emperor, Guan Yu is recruited by rival warlord Cao Cao (Jiang Wen) to help him end the war and unite China. Loyalties run deep and treachery schemes at every turn and its up to Guan Yu to figure out who he can trust. 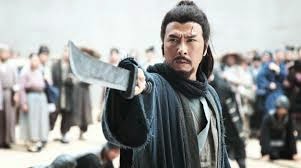 While there have been numerous films about this tumultuous period of Chinese history, I have to say that The Lost Bladesman has to be one of my favorites. Yes Red Cliff was epic and The Assassins had some great atmosphere and acting, but The Lost Bladesman seems to the balance the two and boil it down into a more simplistic tale strikes in its focused narrative and strong character work. Donnie Yen dominates as our hero Guan Yu with his normal charismatic and smoldering persona and his fight choreography is always to die for, but we’ll get to that in a minute. The supporting cast ably adds to his strong performance with Wen simply devouring scenes as the complex and often enigmatic Cao Cao. The combination of Wen and Yen is salient to say the least and when they share the screen the film utterly comes to life.

The film occasionally does fall prey to its unique structuring as the latter half of the flick begins to move away from the torn hero and more towards a romantic subplot that feels slightly off from the rest of the dramatic tension. It also has a few leaps of logic when it comes to the script that creates some awkwardly placed flash backs and an ending that requires more words on the screen then should be necessary even if the final moment with Wen is a great one. Where The Lost Bladesman lacks cohesion in its structure, the film makes up for in charm and brilliant moments though and it ends up being more of an irritation than a true flaw.

To add to the strong dramatic streaks, the film piles on some stellar action sequences to benefit the narrative and characters. Donnie Yen has always been a phenomenal action director/choreographer and The Lost Bladesman is no exception to the rule. Whether it’s the vicious blade battle of the ally against Andy On, a cleverly shot slaughter, or the misty atmosphere of the archer battle at the end, The Lost Bladesman is both artistic and utterly compelling in its action storytelling.

To be honest and considering all of the mediocre action films I have seen released in the US, it is entirely baffling to think that The Lost Bladesman hasn’t had an official release. In an odd twist of fate I found an imported copy at the local library (?!?) so I was able to enjoy this dramaction film, but any martial arts or Donnie Yen fans out there I highly suggest hunting down a copy of The Lost Bladesman. You will not be disappointed.

Written By Matt Reifschneider
Posted by DarkReif at 6:00 PM