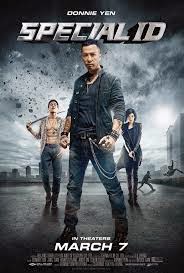 For martial arts fans, Donnie Yen has become something of the pinnacle for the genre. His acting abilities are sincere, he carries charisma in everything he does, and his action choreography and execution are ungodly consistent through every film. Luckily, he’s in Special ID. If it wasn’t for these previously mentioned abilities, I’m not so sure that this would have been a good film at all. It certainly tries in many regards, but the foundations that it is built on are shaky at best.

For an undercover cop like Chen (Donnie Yen), life can be tough as he rides the line between gang thug and the pursuit of justice of a policeman. When one of his protégés Sunny (Andy On) starts creating havoc in the underworld, both the police and his triad boss send him to investigate. With the help of a detective (Jing Tian), he will have to play his role close to the chest against a paranoid and ambitious criminal.

While Special ID certainly plays to its action cop drama clichés at times with double crosses, family hostages, and a man torn between loyalties, it does carry a certain charm with it. At times the film rolls out like a spin off entry of the long running In the Line of Duty franchise with its focus on action and mediocre plot progressions. It’s not to say that it’s a great film, but it has a balls-out 80s Hong Kong action charm that fans are certain to latch onto. Unfortunately, with films like Kill Zone (S.P.L.)and Flashpoint under his belt, I expect far more from a Donnie Yen vehicle in this day and age.

Special ID is built on some tired clichés and predictable plot leaps. Baddies are easily decipherable as baddies. The good guy has to go through all of the tests that a million other good guys in previous films have had to go through. Even the pseudo-romantic subplot between Donnie Yen and Jing Tian seems predictable and too often stale. Truthfully, the only dramatic element that seemed fresh and remotely interesting was Donnie Yen’s relationship with his mother in the film, which becomes one of the few heartfelt elements of Special ID. For those who are well versed in the Hong Kong crime genre, this film is about as by the book as they get.

Just because the dramatic aspects of the film fail to induce any kind of viewer response doesn’t mean that Special ID is a total loss. As I previously mentioned, there is one key that makes Special ID a must have for action fans: Donnie ‘Motherfucking-kick-your-ass-and-not-regret-it’ Yen. Not only does Yen sell his hero as charming despite the rather mundane writing, but he also packs the film full of some ridiculously awesome modern action sequences. As a choreographer, Yen has always been a visceral guy and the work in this film ably depicts those choices. Vicious street fighting style beat downs are relentless here. From a Mahjong game turned brutal, to a survival mode style throw down in a kitchen, to a high octane chase through the streets leading to the grand finale of a Donnie Yen/Andy On fist-to-cuffs, Special ID lays it on thick and its phenomenal to watch. Even Jing Tian gets into it with a brilliantly choreographed car fight with Andy On. The fight work and stunts are quite simply stunning here and it carries the film.

Special ID might not be the pinnacle of a modern martial arts film that I wanted, but I have to admit with just enough charm and amazing action set pieces it came out decent. Considering how the film missed on its dramatic moments and the weakness of the script, I am shocked at how well the film has stuck with me since I watched it. It’s not a great film, but it works for what it is…a slick modern action flick.