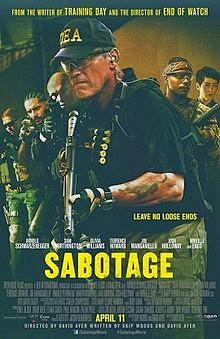 When it comes to the later career of Arnold Schwarzenegger, there has already been some highlights just in the short time he has been back. Cameos in The Expendables films, a punch line secondary character in Escape Plan, and a fun lead role in The Last Stand set him up to be that screen presence that was missing when he went to office, yet most of the roles were tongue-in-cheek material. His role in the latest action thriller from David Ayer is not the fun, tongue-in-cheek roles he has been getting as crowd pleasers. Despite the overall ridiculousness of the plot, Sabotage is about as serious as it gets with some very dark concepts and vicious moments.

Breacher (Schwarzenegger) and his team of elite covert DEA agents have a problem on their hands. Their plan to steal 10 million dollars from a Cartel bust has gone awry and the money is now missing. With the DEA sniffing around for the money and a pissed off Cartel, they are caught in a pretty hard place. Enough that when they start getting killed off, they need to take matters into their own hands...even if it's one of them that is behind it all.

There is an interesting battle happening in Sabotage and I don't mean the gun battles that litter this action thriller. I mean there is an interesting combat of style happening in front of the audience. On one hand, Sabotage is handedly the kind of action thriller one might have seen in from the days of hard 'R' in the 80s with its anti-hero team inspired by the likes of film lore like The Dirty Dozen. On the other hand is the visual style and writing techniques of David Ayer with plenty of gritty modern shaky cam and 'in the moment' edits and zooms. When it works, the combination is rather explosive. A raid on a low end apartment complex which results in some oddly dark comedy and some striking tension. When it doesn't work it can be a bit of a forced effort. Luckily, it works more often then it doesn't and the film plays to some of its strong suits.


From there you have to give yourself a rather specific mindset to find a lot of enjoyment out of Sabotage. It's a very brash and brutal sort of film built on a loose fitting mystery of red herrings and plot twists that comes off thinking it's smarter than it probably is in the end. A few semi-interesting twists and a pretty impressive pacing did keep me interested even if it was more about the strong atmopshere and tension that Ayer creates to sell it then the foundational script. Oddly enough, Arnold comes off as the best actor in the film. This mostly has to do with the almost caricature nature of the supporting cast, whom each have their moments and deliver some banter that ranges from very awkward to inspired chemistry, but Arnold is given a pretty meaty and interesting role here. He owns the character of the older man with regrets and secrets with his grizzled stare and grim delivery. He eats up the scenery (like he always has) and it comes off as something pretty surprising considering the scene stealing abilities of his secondary cast.

Sabotage is not a perfect film. It's brash and super violent with some substantially gory moments that's littered with protagonists that are all anti-heroes of sorts. Underneath that, it is a fairly interesting thriller that feeds off its dark streaks to deliver an intriguing ride. It's not great as the twists are fairly obvious from the get go and some the impact of character arcs are lost in having too many characters in the film. A strong performance from Joe Manganeillo is undermined by lacking screen time for his character shifts to work. For those willing to overlook some of the flaws, there is a rather notable film at the core here. One that should impress Ahhhnuld fans and thriller fans overall.

Written By Matt Reifschneider
Posted by DarkReif at 10:55 AM