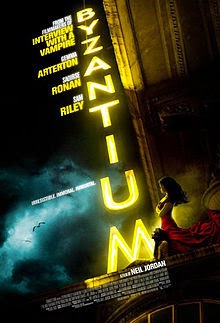 While Neil Jordan has been hit or miss in his career since his horror days, the vision and atmosphere he drove into the vampire genre with Interview with the Vampire is something that changed how I looked at the monstrous creatures growing up. With Byzantium he returns to the genre with another atmospheric tale of immortality and the weight that it brings. Once again, he succeeds in spades here delivering a tale both horrifying in its concept and oddly enough heartwarming in a weird way.

When two “sisters” (Ronan and Arterton) arrive in the new city they have aspirations to be able to stay there for some time instead of moving again so quickly. The problem that seems to plague them is that they are both vampires and their need for human blood leaves quite the nasty trail of bodies in its wake. This time though Ronan has found an unlikely companion in a young man (Jones) and some missing pieces in her life seem to be falling into place. That is until the “sisters” find out they are being hunted…

What I love about Byzantium is how it rides the line between drama and horror. Jordan has always been a master of taking genre concepts and making them artistic dramas that really focus on the human condition regardless if the lead(s) are human or not. Byzantium is another one of those films. While it might not quite be as impactful character wise as Interview or as crazy as the plot of Company of Wolves, the film does strike a rather solid balance between character driven interactions and high arcing concept plots as we follow our two “sisters” through various events remembered through history and how they became vampires and fugitives. The interaction between Ronan and Arterton might be (surprisingly) light in Byzantium, but it’s effective and strong in chemistry and many of the smaller supporting roles are well filled and add support to the overall story.

Don’t expect Byzantium to be a true horror film though. Very little of the film is spent on horror elements like tension or gore, although there are a few brutal moments, instead the film caters to an atmospheric and dark dramatic touch. Jordan is exceptional at crafting films in this sense and it works in spades here. You get a few shocking moments of violence and a pretty sweet blood waterfall at one point, but don’t go in expecting to be horrified.

While the film might not be the best of Jordan’s career, it is a pleasant addition to his spectacularly thoughtful horror films that he crafts. Byzantium has strong performances, an eye for the visually striking, and an atmosphere that ably spreads the lost emotional effects of its characters for the audience. This is not a film for everyone, but it’s certainly a film that hit all the right moments for me.