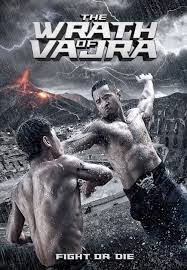 The Wrath of Vajra is not a good movie. Nor did I expect it to be held to the standards of an award winning type film that makes you re-evaluate your life. What The Wrath of Vajra is as a film is pure entertainment. It might not be good by a classical film sense, but it sure is good at being an entertaining flick full of pure heroic characters, evil villains, and high concept fight work.

During World War II, the Japanese in an attempt to help win the war have decided to revive a controversial program called Hades - a program that kidnaps youth and adults and forces them to become killing machines of kung fu glory. Lead by a previous member (the bulked out and oddly charismatic Steve Yoo), they have started their vicious ways again. It’s up to another escaped member K-29 (Xing Yu) to return from his Shaolin teachings to bring Hades down brick by brick…but he’s going to have to defeat their three best fighters to do so.

A Shaolin monk previously trained to be one of the ultimate killers returns to his “home” to face a child hood friend who has become a vicious zealot? He has to defeat three other worldly warriors to get there? Fucking count me in! The Wrath of Vajra is one part Shaw Brothers, one part Cannon Films, and one part modern Ronny Yu inspired action. While the film certainly misses some marks when it comes to the more serious themes of religious freedom, choice of the people, and even a missed opportunity for a parent/child running subject, it works just enough to keep the viewer engaged as it pummels its way through some very striking action sequences.  Plot wise, the film tends to just wear itself thin with too many underlying lessons. In the end it would have been better had it simplified itself even more and focused on one or two themes instead of the slew of different characters each with their own meaning.

Despite the fact that the script is only mediocre, The Wrath of Vajra is an impressively entertaining feat of celluloid. Director Law Wing-cheong does two things amazingly well with the film: pacing and action. The movie flies by at a lightning pace (despite only having three real big action set pieces) and even with some hit or miss performances never did I find myself looking at my watch to see how much of the film I had left. This wicked pace is created because the film very much segments itself in a clear manner. There is an intro, character build, action, build to next action set piece, action set piece, build up to finale, and finale. It works. The action is so damn good that the time between each set piece is spent to build up the next fight. It pays off each time. The highlight of the film happens to be a very impressively shot, stunt filled duel between our hero and the vicious cannibal fighter Crazy Monkey. It’s the must see, must devour, must worship kind of action that martial arts fans crave and The Wrath of Vajra delivers it.

While this kung fu flick might not be the best I’ve seen and carries its fair share of flaws in the writing and some of the acting, the rest is so unbelievably entertaining and fun that rarely did I have time to dwell on those issues. From action set piece to action set piece, the film is built to be a rather efficiently paced piece of kick-assery. Could it have used a bit more meaning to the events? Sure, but who needs that when you this much awesome kung fu? I don’t. Neither does The Wrath of Vajra.