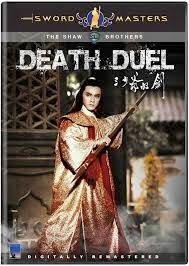 When it comes to the lush style and epic standards of wuxia established by Chor Yuen for the Shaw Brothers studio, I have always been a bit torn. His films are certainly epic with his eye for visual fluidity and having stories based on epic novels. Yet, many of them tend to meander with too much plot, too many characters, and too much fantasy. So when I tell you that Death Duel is not only his most focused film I’ve seen thus far, but his best…you know that means something.

Derek Yee plays Ah Chi, a renowned swordsman who has shunned his fame and lives a humble life as a wandering beggar. When an aspiring and power hungry young woman demands to rule the underworld, she sends out a slew of assassins to find Ah Chi and end his life. Ah Chi must deal with the reality that his fame will not leave, even with a blooming relationship, and he has to fight his way to the end.

The key to Death Duel’s success lies in the rather boiled down simplicity for a Chor Yuen film. Gone are most of the fantasy elements and in there place are stronger bits of dialogue, more kung fu, and a darker tone. It makes the film far more impactful and emotional with the torn feelings of our hero. Derek Yee is handedly capable of handling the duties of our hero Ah Chi in his first ‘real’ big role and he carries a good portion of the film. For a wuxia film, Death Duel has a fairly stream lined plot that allows Derek Yee to truly strut his stuff as both an actor and a fighter. He’s impactful when the plot needs it, vulnerable when the character calls for it, and utterly bad ass as the hero in him slowly comes to realize his calling.

As more and more films in the Shaw collection started gearing towards hand to hand combat in the 70s, the action in this wuxia film does try to blend swordplay and some solid kung fu. Fortunately, Chor Yuen and company make it more relevant as a character trait for Ah Chi as to when he decides to draw a sword or not. Partnered with some pretty strong choreography (including a great impactful finale), Death Duel slathers on great martial arts on top of a focused and driven plot.

It also should be noted that Death Duel contains a slew of great cameos too. David Chiang has a memorable role as an insane martial artist in the last act of the film and both Ti Lung and Lo Lieh reprise a couple of memorable roles from previous Chor Yuen films. Ti Lung shows up for a brief moment as his memorable role from The Magic Blade and Lo Lieh once again steals the show with his remarkably awesome Han Tang, the guardian with a bladed hat and a penchant for wiping blood on his face from Killer Clans. It’s not hugely impactful on the film, but the cameos are there as a very tasty treat for Shaw Brothers fans.

Death Duel is handedly my favorite Chor Yuen film I’ve seen thus far. It’s impactful, dark, focused, and well executed on all levels. Derek Yee proves how great of a lead he is in a film and the action is impressively effective in choreography and in plot impact. Hell, it even has those great cameos. For any fans of Shaw Brothers, I highly recommend Death Duel.