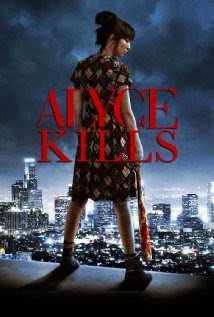 Going into Alyce Kills, I had little knowledge of the film outside of a brief and fairly vague synopsis and some straight to home video quality cover artwork. Coming out of Alyce Kills, I’m pretty sure I have less knowledge of the film and even more confusion about what the film was actually doing. On one hand, it’s a visceral no-holds-barred horror flick and on the other it’s an indie arthouse drama about one woman’s detachment from reality. In between those hands, Alyce Kills is a whole lot of strange.

Alyce has been caught in a state of flux. Not the carefree young person she used to be and not quite feeling like the adult that works a boring and too stressful 9 to 5 job, her only friend is Carroll. After a night of partying, Carroll falls off of Alyce’s apartment roof. Unable to cope with a tragedy that might be her fault, Alyce succumbs to a whirlwind of drugs, sex, and increasing desire to ‘take control’ of her life from those who continually try to take it from her.

There is a great, dark, and impactful film somewhere in Alyce Kills. In a weird way, it’s almost like one of those indie coming of age films from the 90s streaked with a bit of American Psycho for good measure. Unfortunately, the resulting combination tends to be a lot of hit or miss depending on the scene. After taking its sweet time establishing a bond between the two women Alyce and Carroll that tries to find a fine tuning between too much exposition and too little, the second act becomes a scattershot of style and focus that ends up being more confusing than telling. Director Jay Lee has an eye for the gritty elements and visually throws all kinds of interesting artistic moments into the film, but with little script to really be found and a main character that lacks purpose for the audience to care about it flounders about for the first two-thirds of the film.

Luckily, in another odd twist of narrative, the third act almost redeems the entire film from being one big missed opportunity. Here Alyce seemingly finds a deranged comfort in her drive to take control of her life and goes full on Patrick Bateman against those she sees as over controlling. While the first two thirds lack any kind of horror elements outside of a few visions of dead people, this last third goes full on slasher. Brutal gore and kills erupt here and with a sick sense of timing and some strong beats, this portion also slathers on a thick glaze of dark humor…and it’s hilarious. Where was all of this in the first two thirds? I spent an hour getting to this?!

In the end though, a great final act cannot redeem the whole film and Alyce Kills falters as a thoughtful character study and as a horror film. With some fine-tuning and perhaps a greater focus that could be carried throughout the film it would have been good. Alas, Alyce Kills ends up being more disappointing as a whole then the sum of its parts.

The film is available on Netflix Streaming at the time of this writing though and I do suggest a viewing just for the great final act of the film. Outside of that though, I’m glad I didn’t end up buying it.