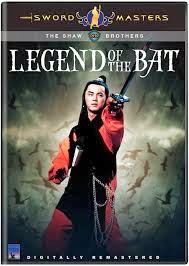 When Well Go USA announced their release of the Chor Yuen epic Legend of the Bat, I was pretty excited. Another ridiculous wuxia film with the great Ti Lung? You can always count me in for that! Charismatic, ridiculous, and epic all can describe what one can expect from the sword battling tale, but even then sometimes it’s a bit hard to follow with as many characters and plot twists as this film spews out. Like most Chor Yuen films it’s a balancing act between the epic and the confusing and this one ends up being a mixed bag.

The rumors of Mr. Bat and his “buy anything” black market on Bat Island have been swirling for quite some time. Anything is possible on Bat Island, but when two of the martial world’s best swordsmen (Ti Lung and Ling Yun) discover a wrecked ship, a slaughtered house, and a swordsman with no memory they decide they need to get some answers from Mr. Bat himself. With the help of a handful of others looking to reap some vengeance, they will have to survive the traps of Bat Island and take on one of the deadliest foes they have ever faced.

While Legend of the Bat might be the second one in the series, a sequel to Clans of Intrigue and followed by Perils of the Sentimental Swordsman neither of which I have seen, I don’t think it’s fully necessary to see those to enjoy what this film has to offer. I certainly still enjoyed it. Even with some flaws in its script and its overzealous approach to the story, Legend of the Bat is still a fun romp and stands on its own.

The film itself is one of the wuxia mixtures of martial arts, fantasy, and drama. Just the kind of film that Chor Yuen delivers, if that’s what you were thinking. The versatile Ti Lung, who puts on a charismatic and righteous performance as the hero, once again ably plays our main protagonist on a quest to right the wrongs of our mysterious villain. The film does tend to spread itself a little thin with its supporting cast and focuses on giving us a slew of red herrings which does make the film a bit bloated and overcomplicated. The plot itself keeps a rather straight track with its focus, building the mystery of Mr. Bat’s identity and having our hero find others to team up with along his journey, but it can be clunky as it jumps from dire situation to dire situation. Hell, we even get two trapped on a boat sequences which does come off as a little overzealous.

As for the action, the film is more focused on character and plots to truly have the best action. When it happens, it’s a blast to watch as Chor Yuen certainly has an eye for the epic. We see a shack torn wall from wall and are treated to a great finale where our heroes must finally confront Mr. Bat in his element: the dark. There is less hand to hand combat and the film really focuses on swordplay (I guess that’s why it was released under the Sword Masters collection) and it uses more of the fantastical elements with the swordplay for spectacle. The action is fun, it’s just not up to par with some of the other Chor Yuen films.

Legend of the Bat is the kind of film that you will either love it or hate it. It’s definitely a charming flick that highlights some of the ridiculousness of the plots and relies on some fun performances from Ti Lung and Derek Yee, but it can be a bit hard to swallow with its seemingly Lord of the Rings like journey to Bat Island. Fans of Chor Yuen or Ti Lung will definitely want to pick this up.