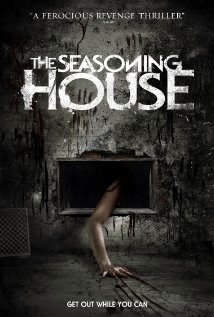 While Well Go USA has been the number one distribution company for cult fans to look to for the best of Asian cinema in the last few years, it would seem that they are expanding their wings into distributing some other genres. In this expansion, they ended up releasing "The Seasoning House" a wicked little atmosphere driven horror thriller that builds on realism and subtlety. Going into the film I had little to no expectations and by the end I was engrossed with what this little film that could had to offer. It might not be best horror film of the year, but it was definitely a pleasant and brutal surprise.

War is a terrible thing and in the aftermath of a war torn area, it's the young teenage girls of a forced brothel that seemingly suffer the most. A young deaf and mute girl (Day) is given the task of being a "caregiver" for the other girls who must keep them clean and deliver drugs to them to keep them docile. When she makes a new friend who is able to communicate with her, she is given the opportunity to find a little bit of redemption...and it might get bloody when she does.

I think that it must be said that "The Seasoning House" is a ballsy film. Plot wise, the film deals with some very heavy topics: the aftermath of war, rape, drug use, and violence. At times it can be a little overwhelming as we are subjecting to some heart wrenching moments through some time jumping back story for our young heroine (which can be a little confusing at first as it comes rather suddenly) and we are shown the conditions that this war has left these young girls in. "The Seasoning House" also has a deaf/mute lead. While this isn't anything new at this point for film (both "Sympathy  For Mr. Vengeance" and the original "Bangkok Dangerous" had deaf/mute leads), for an already slow burn film it's a gutsy move that pays off. It helps that Rosie Day is a strong and subtle lead that can say a lot of a little facial expression and that the secondary characters are strong enough to carry it, but still it's a plot progression that certainly adds to the entire heaviness of the film.

Not only does "The Seasoning House" play it heavy handed in its writing and structure, but director Paul Hyett takes a rather modern French horror approach to the entire thing by focusing on thick atmosphere, slow burn tension, and bursts of extreme violence. With high risk comes high reward though and "The Seasoning House" easily benefits from all of these chancy plot progressions and stylistic choices. Don't be afraid if you head into the film for a while and nothing high energy happens for a while because it's coming. The final third of the film is viciously brutal with super realistic gore effects (and boy does it get gory at times - there is a throat cut that looks so insanely real that it hurt) as our heroine decides to instigate some shit hitting the fan. While occasionally it throws a few random loops that seemed a little forced as our lead runs from the militant oppressors, the combination of strong artistic choices and strong execution works very well for "The Seasoning House."

This film is not for everyone. The mixed reviews from various critics would indicate that, but if you are a horror fan, particularly for that modern French style of stylized atmosphere and brutality, then this is a must see and one of the best genre films of the year. It's a heavy and very trying film as it presents some very brutal moments and concepts, but its artistic merit takes it to another level.