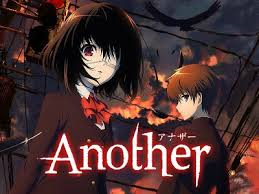 While October might be past, that doesn't mean it's time to stop reviewing horror! This review is for the suspenseful and bloody series "Another". So grab your battle ax and hockey mask to join me in the corn maze of terror, this should be fun!

Synopsis- 26 years ago a middle school student from class 3/c suddenly died. The student, Misaki, was popular with classmates and a beloved athlete. After his untimely demise the other students and faculty decided to carry on pretending he never died until after their graduation. In the year 1998, a new student named Sakakibara Kouichi joins class 3/c and immediately feels the cold chill from the other classmates. One classmate catches his attention right away, she is the beautiful eye patch wearing Mei Misaki. No one seems to notice her and before long Kouichi is caught up in the twisted history that lies within the secrets of class C.

My review- When I first heard about "Another" I was excited to say the least. I had been looking forward to the next big Horror series and thought for sure this was it. As a horror fan there isn't too many titles to choose from within the genre. So I was attracted to this title right away. After only a couple of episodes, I started to notice a pattern within the series. Each episode played out like a "Final Destination" film. Each death was predictable and boring. Sure there is a bit of gore/blood shed, but unless I missed my calling as a psychic each death was easy to see coming.

This is just one of the  problems with this series. I felt like the main character Kouichi was not very well developed. He really had  no personality making it difficult to stay interested in him and the series alike. I will say that I am not too hard to please when it comes to entertainment. With that in mind, know how much I really wanted to like this series but couldn't find anything to hold on to.

My expectations going in were standard, but were met with disappointment throughout. I was hoping for suspense and action mixed with jumps and bumps in the night. What was delivered was only a small amount of suspense with teenage girls whispering to one another, building up suspense on a secret only they knew. However, that quickly faded turning into a series of bad dialogue and predictable outcomes. Again with poor character development I never felt emotion for any of the main characters. The deaths of these characters felt more like a game of how ridiculous can we make it as opposed to really making the viewer dread the outcome. I guess what it really comes down to is bad writing. Overall, the look of the series is nice enough to look at. Kind of like the hot girl you see everyday and then you finally speak to her but as soon as she opens her mouth everything goes to hell. "Another" is best left to your imagination. The writers of this series should spend some time developing their craft not taking what has already been done and watering it down.

I will end with this. Whatever the creators were trying to do didn't work for me. As a horror series it failed miserably . I don't care for gore for the sake of gore but if you want to watch a series that is fun to make fun of by all means this is it.  Here is to hoping I can find the next good horror series. With that I give "Another":