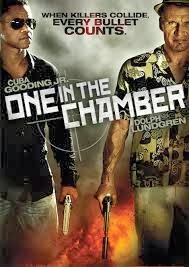 I most certainly don't keep it a secret that I love action films. I also don't keep it a secret that I watch a lot of straight to home video action films too. I've done my best to keep honest with you, the readers, about why I feel like straight to home video action might be one of the best overlooked genres in the system right now and it's films like "One In The Chamber" that make digging through them worth it. To be honest, I didn't have very high expectations for the film, but it's quite the serviceable film and it works more often than not as both an action film and as a crime thriller.

At this point, there isn't a whole lot that a crime thriller could do that would be considered "new" or "unique" if it's to be taken seriously. "One In The Chamber" isn't doing a lot to make it's statement on the genre either. When it comes to the thriller elements involving crime lords in Prague, betrayals, and assassins as our gunman Ray Carver (played with enough decency by Cuba Gooding Jr) is forced to play sides against two powerful king pins, "One In The Chamber" does come off as fairly formulaic. The emotional sub-plot is under developed and a bit awkward in pacing and obviously plays second fiddle to the gun-toting main plot and the film comes off as predictable overall. It's not all that original in this sense and even most of the action sequences seem to be of the general variety. Director William Kaufman adds enough flair to make them entertaining as possible, for example the rather by the numbers opening sniper hit gets a much needed boost of energy from his camera work and pacing, but those are nothing new either.

Let's be honest with ourselves though. "One In The Chamber" is a direct to home video affair and I didn't go into it with the highest expectations. Thusly, in the film's execution, I came out pleasantly surprised. Despite his fall from A-list status, Cuba Gooding Jr still has some decent acting chops to carry the film's emotional portion well enough with some solid voice over narration and subtle moments of the standard "hitman-with-a-conscious" role. He also shares time with ever awesome Dolph Lundgren as a pseudo-secondary lead. Any film with Dolph is a welcome film in my house and he seems way too comfortable as the charming and slightly insane 'other' hitman The Wolf here who's asked to hunt down Cuba. Dolph once again seemingly eats his scenes with vigor and his fedora n' hawaii shirt sporting hitman cries out to be franchised. If anything, I could have done with a lot more of him in this film (he shows up a bit later in the film - with a glorious entrance sequence where he takes a phone call in the middle of hit in the happening), but whenever he's onscreen he lights it up.

"One In The Chamber" is the kind of film for fans of finding decent low budget flicks. It's not going to be winning over the harsh artsy critics or the even the more fickle cinephiles, but those looking for a well executed cheap rental are sure to find plenty of entertainment here. It's a well executed film that has to earn its merits with charming characters and director flair over it's mediocre script, but "One In The Chamber" does just that and won me over.

BONUS: The film also hints at the prospect of franchising both of the lead characters. In all fairness it's a long shot, but I sincerely hope that they do because it was way too much fun watching Dolph do his quirky routine in this film. It could end up being a great direct to home video buddy hitman series!