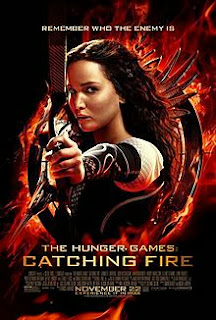 I wasn't sold on "The Hunger Games." The film wasn't bad by any means, but I definitely felt like it missed a lot of depth that it needed to work to its favor. As a fan of "Battle Royale," it was hard to not want the film to be a little edgier. Going into the sequel, under the subtitle "Catching Fire," I kept a skeptical front believing that without some of the darker tones and heavier themes that this series would only appeal to the family friendly crowd. Luckily, "Catching Fire" fixes most of the issues that plagued "The Hunger Games" and takes the series to the more serious places it needed to go.

Katniss (Lawrence) has had a tough time adjusting to her new place as Hunger Games winner. She suffers from night terrors and pressure from President Snow (Sutherland) to continue on her fake romance with Peeta (Hutcherson) is taking its toll on her psyche. But that hasn't stopped what her win has meant to the rest of society. Uprisings and revolt is in the air. Now President Snow wants to make a statement with the next Hunger Games by having all of the previous winners back...to battle to the death.

So let's start with what "Catching Fire" does right, particularly in reference to the first film. Firstly, they replaced director Gary Ross. While they guy is not a bad director, I still have a soft spot for the fun and heartfelt ridiculousness of "Pleasantville," new director Francis Lawrence fits the style better. His work on films like "I Am Legend" and "Constantine" shows up here in the balance between pacing, action, and visual strength. The shaky cam action is mostly missing and his ability to add darker streaks (an aspect that severely hindered "The Hunger Games" and its subtext) make "Catching Fire" a much more immersing experience.

Secondly, the execution is just on a higher caliber. The action is better paced in the latter half and the first half is hinged on a deeper set emotional connection with Lawrence (who once again shows quite a bit of talent in the highs and lows that might have come off as cheesy) and a lot more political and social subtext. It's this political and social subtext that easily kicks the film up a notch. I have to give them props for having two amazing actors as the film's villains (Sutherland and Seymour-Hoffman) as they conspire in board rooms in subtle sinister ways that brings to mind the old days when Blofeld would meet with his agents of SPECTRE to plan world domination against Bond. While I suppose many will criticize the love triangle that has seemingly taken a big back seat to the rebellion storyline, but I was fine with that choice. Peeta and Gale are handedly two of the weaker "mainline" characters in these films anyway.

Truthfully, there is only one complaint that I have with this entertaining piece of thoughtful pop culture film. The structure. Like many of the mega-franchises that have hit theaters in the last decade or so, "Catching Fire" is built to be continued in the next film so it sort of plays into a 'half-arc' of sorts where it has little falling action so that it can end on a cliffhanger. While this is most certainly fodder for fan excitement, it leaves the film, on its own, with a lot of untied threads and half developed concepts. Partner that with a film that does have very definable 'two halves' (the emotional and political first half and the action second half) and the structure left a bit to be desired.

"Catching Fire" is a great blockbuster though. It's thoughtful in its stronger political subtext, the emotional portions are punchier (despite both Gale and Peeta having underdeveloped arcs again), and the action is more fluid in pacing and better shot. While I still doubt that it will end up making my list for best action films of the year still, it's a fantastic film that the whole family can watch. One that was certainly a surprise leap in quality over the mediocre first film.