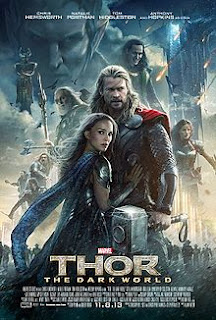 I said this in my review for the first "Thor" and I'll say it again just for context clarification: I was never a fan of Thor in the comics. The first "Thor" film, despite some charm and fantastic casting, was an uneven adventure with some odd character work and patchy script. My expectations for this sequel were much higher given the continued nature of strong films in the Marvel Cinematic Universe and the epic look of the film, so even as a non-fan of Thor I was pretty stoked to see this film. Like the first one, the script is still a bit patchy and the character work for some of the new (and old) people showing up here can be hit or miss, but it's hard not to say that I still didn't highly enjoy "Thor: The Dark World" as entertainment...which is what I mostly expect from this sub-series of The Avengers line up.

This time around, Thor who has been tasked with cleaning up the nine realms after the destruction of the Bifrost at the end of the first film, which I assume was part of his leap to New York for "The Avengers," and he seems to be having a blast at doing it. Unfortunately, an ancient evil (is there any other kind?) arises in the form of the stone cold stare of Malekith who wants to destroy all nine realms at once using some floaty red shit called The Aether.

Ironically, the first "Thor" and "The Dark World" share many of the same strengths and flaws. The charm of the first film remains intact in this one as Chris Hemsworth showcases why he became an A-list actor seemingly overnight with a smirk and hammer drop and the secondary characters (despite a significant lack of screen time and/or character development) continue to eat up scenery. The casting is simply superb and with the efforts of director Alan Taylor, it works much, much, much better than the lacking script should have. Tom Hiddleston simply outshines everyone as the recently turned anti-hero Loki in the film (who's mischievous quips and glances had the crowd rolling in the theater) and even smaller characters who have way less screen time or development (like Elba as Heimdall or Skarsgard as Selvig) seemingly can hold up scenes with relatively very little to say or do.

Unfortunately, "The Dark World" does struggle to get the plot moving. The first half, after a few laughs and fun battle sequences, sort of stalls out when they try to reintroduce the romantic portion. Natalie Portman (once again) comes off as a flat character and her budding on screen moments with Hemsworth still lack the substance needed to hold up the charm of their characters. Hell, even the main "oh no, this fucker is going to even all of the realms at once!" plot seems to drag for a good portion of the film. Eccleston seems bored with his stony looks as the villain and certainly pales in comparison to the screen devouring Loki from the first one/"Avengers."

That being said, the one true thing that "The Dark World" does better than "Thor" is in the action. While the film starts off with a rather mundane medieval style battle that's play more as a glorious re-introduction to Thor more than anything else, the rest of the film seemingly finds a much better focus. The attack on Asgard is epic in nature of visuals and the finale features Thor and Malekith doing some random realm hopping that makes for one of the most entertaining battles I've seen on film all year. It might rely a little too much on CGI and visuals for the old school action fan in me, but it's hard not to get giddy at some of the well timed humor and strong pacing of these moments.

All in all, I enjoyed the film much more than the first just as it was simply more entertaining. It's still built on a flawed script where some characters find themselves as additional background pieces instead of true characters, but it's damn charming and the action is highly potent. It might not reach the heights of "Iron Man 3" in quality of balance or the spectacle of "The Avengers," but "The Dark World" certainly throws itself in as being one of the most fun.