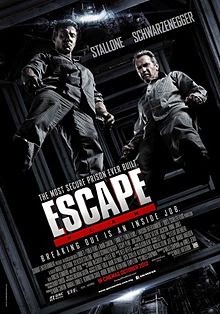 The idea of having Sylvester Stallone and Arnold Schwarzenegger team up to break out of an "unbreakable" prison sort of makes me feel feeble and unmanly. I mean, two of the greatest action film icons teaming up to take on incarceration and all of the corrupt and ferocious private sector villains who run it? This is the kind of action film that old school action fans crave! While "Escape Plan" isn't quite the balls out action film one might assume, it's still an entertaining-as-hell flick that delivers on its promises and adds a few surprises as it goes.

While my assumption going into "Escape Plan" would be that the film would be an action packed modern film, it's only fair warning for those who haven't seen the film that it actually owes a lot to classic prison break thrillers then it does a "Rambo" or "Commando" flick. Which you know, is perfectly fine by me because it's a genre that hasn't gotten its time in the spotlight for far too long. It's not surprising that, considering their age, that Sly and Arnold took this film away from its action motifs and further into a thriller mystery film. It's not completely void of action as we get a couple of good fist-to-cuffs mid way through and the finale has plenty of gun action and a pretty sweet (if not overly edited) throw down between Sly and Vinnie Jones, but the film isn't focused on that and spends more time building plot and characters. It was certainly a pleasant surprise.

The film takes itself rather seriously for the most part, outside of the obvious nods to the fact that we get a fist fight between our two heroes where Arnold taunts that Sly 'hits like a vegetarian,' and quite frankly its a great choice. Sly and Arnold have proven that they can eat up scenes like the proverbial red meat the previous line would indicate and they do so eagerly here. Not that acting is meant to be of the highest caliber, both Vinnie Jones and Jim Caviezel rollick in cheesy lines and sinister glares as the film's two main villains, but the film certainly presents itself in a serious manner. The plot is ridiculously over the top as Sly, the world's greatest jail break connoisseur, finds himself placed into a prison built on the ideas in his book and has to rely on the help of a fellow prisoner in Arnold to bust out. Along the way they get the help of a few surprise secondary characters played by the likes of 50 Cent, Vincent D'Onofrio, and Sam Neill (whom all, sans Neill, feel more like padding than anything else) as they attempt the most epic of jail breaks. While the script might sound like its straight from 1992, it certainly carries a substantial amount of charm in the dialogue and odd plot progressions that sells some of its more over the top twists.

Perhaps the biggest road bump that "Escape Plan" has to account for is the relatively odd choice in director of Mikael Hafstrom. While he definitely builds on the prison break atmosphere for the film with some strong tension and claustrophobia (his talents lie there with previous films being "Derailed," "1408," and "The Rite"), his handling of the final act can be a bit choppy. The fight between Sly and Jones while strongly choreographed overall is often too dark and too cut up to be as cool as it could have been. Even Arnold's moment at the end with his big ass machine gun seems to fall a bit flat stylistically. While he succeeds for the first two thirds at handling the film, when "Escape Plan" does kick into action mode it's obvious he has a bit harder time handling the material.

For fans of Sly or Arnold, "Escape Plan" is a fucking blast. It's charming and very entertaining as it oozes smarmy characters and plays around with its ridiculous themes. It had a few fun surprises in plot twists and the addition of bearded Sam Neill, but ultimately it's a film for fans of that Sly and Arnold style of the early 90, of which I am a proud card carrying member of. "Escape Plan" is not a film for everyone, but it certainly hit all the sweet spots for me and I will be there day one for its home release and I foresee it being a regular watch in my collection.

Written By Matt Reifschneider
Posted by DarkReif at 11:04 PM