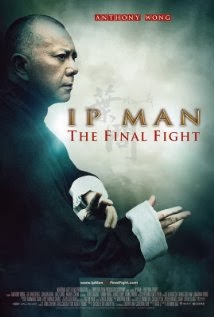 It's coming to the point where Ip Man films are evolving into their own genre within martial arts. Is it so hard to believe that there could be something like Ipsploitation? With the release of "Ip Man: The Final Fight," this will be the fifth film to be based on the historical figure of Ip Man since the awesome Donnie Yen/Wilson Yip film in 2008 and Anthony Wong will be the fourth actor to portray the titular character in just the US releases that I know of. I think that means we have a trend, no?

So just how does "The Final Fight" fit into this trend? Well, "The Final Fight" feels like less of a cash in then the prequel "The Legend Is Born" with its classic kung fu motifs (also directed by Herman Yau), but it's not quite the dramatic effort that "The Grandmaster" seemed intent on building. It's a film that tries to balance the two elements and follow the formulas created by the previously mentioned Yen/Yip entries. It starts off with a narration by Ip Man's son who is telling the story of the final years of his father's life (ironically so, considering his character really doesn't show up til the second half of the film) as his father moves to Hong Kong to attempt at making more money to support his family who stayed in their home town. Here he starts a new school and all kinds of shit goes down.

Truthfully, outside of a few budgetary issues that did seem to hold the film back in a few places, there is only one thing that holds "The Final Fight" from reaching the heights we've seen in other films of this Ipsploitation trend. There is simply too much going on. When I say too much, I sincerely mean there is a mind boggling amount of subplots going on. There are five or six of his students in Hong Kong that have their own plots that are intertwining between the main plot of Ip Man and his struggle to find his footing in Hong Kong. Some of these sub plots are successful, including a rather intriguing police officer who finds himself at odds with a local crime lord with a massively scarred face, but others seemingly feel like a means to an end (including a couple of marriages of students that seem tacked on for dramatic effect). There is even a fairly intriguing plot with a rival school (the master played by the massively underrated Eric Tsang, who once again delivers another great and charismatic performance here) that ends up being something of a let down as it is abandoned in the third act. What I wouldn't have given to see Eric Tsang and his crew join forces with Anthony Wong and his crew to bring down the villain who arises in the second half. Sounds like kung fu awesomeness.

Outside of that, "Ip Man: The Final Fight" is a rather entertaining film. It's a blend of more modern dramatic character work and a classic kung fu sense of fun with its fight sequences. Anthony Wong delivers a rather compelling and subtle performance as Ip Man and some strong performances as secondary characters populate the landscape around him. The fight sequences are entertaining and poignant ones to the plot, being highlighted by a very awesome finale with multiple fights and a hurricane as the backdrop. While I would have liked the villain of the film to be introduced a bit earlier to create more of an impact on the finale, the execution of the film is pretty solid all around.

Truthfully, the only issue that arises is that "The Final Fight" comes off as rushed to try and fit all of it into the play time of the film. This leaves a lot of oddly dropped characters and plots that can be frustrating for film critics, but your average kung fu fantatic is going to find plenty to love with its strong fights and touching moments of teacher and student relations. While its not quite as thoughtful as the Yen "Ip Man" films, quite as old school as "The Legend Is Born," or as (eye rollingly) artful as "The Grandmaster," "Ip Man: The Final Fight" is a fun mix of all three that should please Ipsploitation fans in all the right ways.