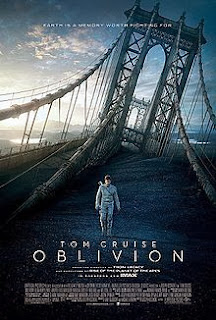 While I know plenty of people that would specifically skip a movie because of Tom Cruise, I have to admit that he generally stars in films that I enjoy. When it comes to his choices in action or science fiction, the guy picks some great films to carry on his tiny shoulders. Even with trailers that seemed a bit lackluster, I kept my hopes up for "Oblivion" and its classic looking science fiction ways. With fairly high expectations in tow, "Oblivion" kicked into high gear to be one of the best science fiction films I've see in the last handful of years as it delivered a slew of clever twists and strong execution with it.

When Earth was decimated after a brutal war with an alien race, there were only remnants of what life used to be left behind. For a drone service man like Jack Harper (Cruise) and his navigator partner/lover Vika (Riseborough), it's more or less a job. Keep the power stations absorbing Earth's water going to keep the rest of humanity alive in space and keep the alien scavengers from doing too much damage. It's not enough for Jack though as he begins to see cracks in the logic of his job and when a ship crash lands on Earth carrying mysterious people, he's lead on a journey where life might not be all that it seems...

I'm not going to call "Oblivion" original or all that creative. It's not. It's a culmination of a lot of classic science fiction elements mashed into one, in fact. A little "Matrix" here. Some "2001" there. There's even a bit of "Blade Runner" to be had in some character work and themes. "Oblivion" is not that science fiction film to revolutionize the genre. It's just done really, really well. Director Joseph Kosinski knows his classic science fiction and "Oblivion" is the kind of film that perfectly homages the themes and ideas of Isaac Asimov and Phillip K. Dick into a modern action spiced flick. It loves to throw in a lot of twists and turns into the plot so just when you think you have it figured out it likes to take a different path, and while many of them are twists we've seen in science fiction past, "Oblivion" makes them work. So don't be fooled by those who say it is original or unique...what they really mean is that the film comes off as fresh even though it's built on the same foundations as many of the cornerstones of the genre.

So what makes all of these well trodden ideas and twists work is essentially the strong execution. Director Kosinski certainly has an eye for the visually captivating (as we saw in his work on "Tron: Legacy") with some epic sets like an overgrown football stadium, underground bunkers, and the technician's sky tower and with a strong sense of pacing and space he is able to navigate this futuristic post apocalyptic world with relative ease. The small, but very effective cast handles the material with seemingly heartfelt vigor. Tom Cruise once again seems very natural in all the emotional states he has to go through here and his supporting cast, with particular reference to Riseborough who matches him stride for stride, handles the often outrageous moments well. If anything, there are a couple of moments where the action seemingly breaks the atmosphere created with the film (including a massive gun battle that reminded me of the mech-warrior "Matrix" shoot out - which is not a good thing) and it felt out of place. Kosinski handles those sequences well, but for a film that is more plot and character driven they did feel a bit awkwardly long.

While this review might be slightly vague in details pertaining to the film, that's intentional. There are a lot of great surprising plot twists and moments that should be referenced but for the sake of you, the reader, I will refrain too much. "Oblivion" might not be a perfect film as it tends to ride the coat tails of previous science fiction classics a bit too much, it's handedly still one of the best the genre has coughed up in a while that remains true to what science fiction should do - be an observation of the present by speculating in the future.