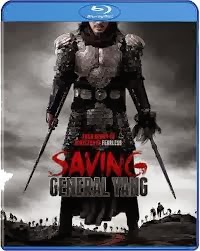 While Ronny Yu’s career has had some twists and turns of it’s own, from a brief career as a director in China with “Bride With White Hair” to his horror leap in the US and back to his roots with the epic Jet Li film “Fearless,” my expectations for his historical (sort of) war epic “Saving General Yang” was high. He’s always been a dark horse director of sorts and each of his films tends to be fairly distinct from the others. For his latest, he harkens back to an old school feeling film with some modern flair and the results, while perhaps uneven, are entertaining to say the least.

When the kingdom’s peace is threatened by war, General Yang (Adam Cheng) is assigned to be the backing force for the main army to quell the mounting tension from a young and vicious villain Yuan (Shao Bing). Little does he know that there is an ulterior motive behind the attack and Yang is forced into hiding in the mountains. With no help on the way, his seven sons decide to take it into their own hands with a handful of soldiers to find their father and return him to safety…perhaps falling into the trap they set out to defend.

Ronny Yu and company set out to make one hell of an entertaining film with “Saving General Yang” and they more than succeed. One issue that viewers might stumble into is having their expectations about what the film is because it’s not a “war epic” in the modern sense of the term. While the scale of the film does tend to be larger than most in some aspects, there is most certainly an opening sequence featuring full blown armies clashing on horses and what not, the film rarely plays out like “Red Cliff” or other films of that caliber. Instead, “Saving General Yang” plays out more like an old school Shaw Brothers flick – gimmicks and all. The combination of seven brothers (whom all have distinct personalities and talents that come out little by little as the film rolls on) having to trek through various obstacles and battles simply resonates with something that Chang Cheh and the Venom Mob might have cooked up in the 70s. The character work, while gimmicky with the brothers, worked well for me despite the fact that there is a lot of ground to cover for them. The various ensemble casting sparks with a fun and occasional heartfelt chemistry that makes the play time fly by and it makes for a sincerely fun and entertaining watch.

From there, Ronny Yu does encompass a rather modern and visual style for the film. The battle sequences might mostly contain some solid hand-to-hand combat and choreography, but he injects a few other action set pieces to satiate the spectacle driven modern audience. An initial battle features a silly, but very awesome looking medieval version of napalm and his tendency to paint in some darker tones with the film’s violence and visuals cannot be missed. There is a ridiculously dark and brutal sequence where the seven sons have to cross the original battle field to only find their comrades’ bodies staked on spears and hung as a sort of macabre grave yard. I knew that Ronny Yu’s days as a horror director would peek through occasionally.

For what it’s worth, I had a blast with “Saving General Yang.” It might not be the overtly serious and dramatic “war epic” that the term has come to mean in recent years, but the Shaw Brothers inspired plot and slightly gimmicky execution make for a film that I will watch over and over again. Some might not be able to buy into the cheesiness of the film, but I felt it only added to the entertainment that Ronny Yu and company deliver.