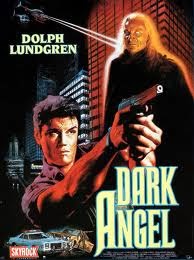 While Dolph Lundgren's career might have been a bit hit or miss to this point, there was a time when he showed massive potential as a lead in the late 80s and early 90s. This period contains the massively overlooked and awesomely cheesy "Dark Angel" or as it was known in the US "I Come In Peace." While this is the kind of film that might not appeal to everyone with its over the top concept and cheesy demeanor, for anyone that loves 80s style action then "Dark Angel" is a must see kind of flick. It's silly, gritty, and has an endless supply fire ball explosions. It's everything that one could want in a B-grade action film.

Plot wise, "Dark Angel" is an utterly wacky sci-fi spin on the classic 80s buddy cop flick. This time we get the renegade 'don't-play-the-rules' cop played by Dolph Lundgren and his substantially shorter and tight FBI partner (who's played with strong comedic effect by Brian Benben) as they try to track down a load of stolen heroin. The problem is that, despite their well timed bickering and differences of opinion on how to do things, this drug was stolen by intergalactic drug dealers. Chaos ensues, explosions happen, Dolph's hair gets spikier...it just goes nuts.

While their are certainly some problems to this plot and story, including the fact that the aliens and our two heroes seemingly have unrelated plots until about two-thirds of the way through the film, "Dark Angel" does some pretty awesome things for its limited budget that twists in some fun cliches and some ridiculous moments. Firstly, Baxley creates a great gritty atmosphere that works in juxtaposition to some of the lighter elements of the film. At times it feels almost like a graphic novel based sort of style with the hulking tall aliens and their white eyes and the dark streets lit up with massive fireball explosions. Tonally, it's a carry over from the 80s and its great at it.

Secondly, "Dark Angel" truly balances itself well. There is enough character work and arcs to get you invested into the characters, even if they are cliche, and the combination of science fiction and action make for some great set pieces to utilize the talents of all involved. In fact, this film might have more explosions then most of the actions films in the last year combined. Even the comedic beats are well timed to add to the entire silly experience of the film. Where else can you find a movie where the villain shoots throat slashing CDs or Dolph spouts of lines like "Either you're Santa Claus or you're dead, pal!"

"Dark Angel" isn't all fun and games though and any self respecting film critic can plainly see the film's flaws. As previously mentioned, the film takes quite some time to get the two main plots to come together and in the mean time tends to have various subplots that mean little in the way of adding to the story. We have a dead partner in the opening sequence who is quickly forgotten, there is an entire subplot about white collar drug dealers and money men that pops up randomly, and our romantic thread is bare thin at best. Even the acting, outside of some fun bits, is fairly run of the mill. Dolph, for all of his charm, struggles with anything more than one liners and action bits and our villain ends up being far more funny than scary. "Dark Angel" isn't going to be redefining the genre by a long shot.

If you're not willing to buy into the cheesy portions of the film, you won't enjoy hardly any of this film. It is, generally speaking, a B-film, but it's a fine addition to any collector's treasure trove of B-films. It's entertaining as hell with its crazy one liners and ridiculous amounts of action even if it struggles with some cliches and underdeveloped subplots. "Dark Angel" is definitely a film for cult film fans.