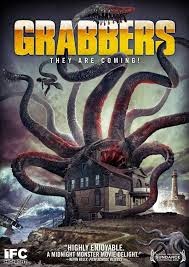 It's not some mystery that "throwback" films are a bit of their own genre now. Whether successful to the mainstream or not, the cult status of some of these films tends to be pretty high and for 80s style monster flicks like "The Host" and "Attack The Block," there are some beautiful films that should garner more attention then they probably do. "Grabbers," a nifty little Irish throwback 80s creature feature, is like the previously two mentioned films as an overlooked gem. While this one might not be quite as ballsy when it comes to storytelling or in its execution, "Grabbers" is still a blast to watch for those pining a bit for an older style.

When the local sheriff goes on holiday, he leaves the small Irish island community in the hands of his alcoholic officer O'Shea (Coyle) and an up-and-comer Lisa (Bradley) who volunteers for the assignment to help him out. Unfortunately, despite their initial differences on how to go about things, the two officers are going to have to mend their own issues when a local fisherman Paddy (Roddy) discovers a "grabber" in one of his lobster traps setting off an other worldly attack on the quiet town.

The premise for "Grabbers" is simple. Two different style cops have to team up to fight off an alien invasion. It's formulaic, oh yes, but the film comes off as sincere in its simplicity. Instead of wicked plot twists or over developed character nuances, "Grabbers" focuses on being fun and entertaining with its concept. While this kind of formulaic approach may not work for a lot of films which come off as watered down, for this little picture its simplistic approach comes off more as endearing and homage-like to those classic monster flicks of the 50s (and stylistically like the 80s) then it does as a weakness. While the romantic subplot is pretty predictable and the secondary characters more like caricatures then real people, it works for "Grabbers" to make it an easily digestible and fun to follow film.

It does help that director Wright and his band of merry men and women all seem to be on one page for what "Grabbers" is meant to be. The character arcs for our two leads (an alcoholic and workaholic respectively) might be blueprinted from the beginning, but our actors sell the little moments of comedy and chemistry so well that rarely did I roll my eyes at the predictability of it all. Coyle is extremely heartfelt in the role and Bradley perfectly compliment him onscreen to make the basic scenario work. Even the supporting cast while being niche roles (the drunk fisherman, the cynical bartender, the nerdy scientist) are played in ways that rarely feel that way and our actors and actresses own their moments.

To be truthfully honest, the weakest part of the film is the special effects. I loved the creature design for the grabbers themselves, but the lower end budget tended to weaken the overall flick. By the time we get to the finale where the most CGI and special effects are needed to sell the starfish from hell monsters, it didn't quite have the 'oomph' to get the process done to the caliber at which the rest of the film existed.

All in all, "Grabbers" certainly works as a fun and entertaining homage film to the classic 50s monster flicks done in a full on 80s style. For cult film fans, it's a blast to watch and it works amazingly well considering its tried-n-true plot setting and basic characters. It may not inspire the love I felt for it in everyone, but for those looking for a great time then I highly suggest "Grabbers."