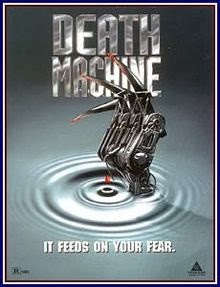 When Stephen Norrington's career might have come to a very sudden and disheartening stop with "The League Of Extraordinary Gentlemen," but his career in the beginning was very promising. After years of special effects work, his debut as a director with "Death Machine" is a fairly effective and charming science fiction and horror piece. While its low budget and occasional leaps of logic might prevent it from being a straight forward missed classic, the ridiculous amount of violence and dark quirks make it an immediate cult hit though. One that readers of Blood Brothers will want to experience.

Just as a 'for your information' for readers, I was only able to experience the "American Cut" of the film. From what I gather there are something around four different cuts for the film and I was only able to see the second shortest cut. Despite the shorter length for a cut that's more likely to be awesome, I have to admit that I had a blast watching "Death Machine."

"Death Machine" is a film that probably released in the wrong decade. While the tag at the title of this review states 1994, this film would have probably done better with audiences and critics had it been released in 1988 instead. The tone and general style of the film reeks of 80s grit and violence and "Death Machine" owes more than its fair share to films like "Robocop" and "Terminator" more than any its peers in the early 90s. This tone does wonders for the film (particularly for those with a love of the 80s style) and Norrington racks up some solid tension and atmosphere to get the viewer engaged.  Partner this with the awesome special effects for the killer robot (outside of the random "vision" of the robot and the title sequence - this sucker is all legit and no CGI!) and this is a 80s science fiction nerd's dream.

Unfortunately, outside of the style and special effects this film can be a little bit more hit an miss. The film seems to rush through its "dystopian" setting to get us to the terror of our clawed robot and it has to sacrifice some character work for our heroes to get us to the action. Acting wise, the film can be hit or miss too. There is some great charm to some of the performances, but Brad Douriff owns this film with his seething and utterly creepy villain. He owns it so much that most of the other actors seem to pale in comparison and it actually might lessen the film's impact overall.

"Death Machine" is not a 'great' film overall, but the cult film fanatic in my certainly ate up the high velocity violence (of which there is plenty) and the tone of the film. Norrington does falter to some amateur elements with his writing and plot work, but his style and atmosphere make up for a good portion of it. Now, I'm very curious to see what the other cuts of the film have in store for me if I can hunt them down...otherwise, "Death Machine" is going on my list of great overlooked films, even if it's not a great film itself.