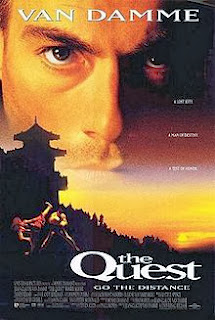 Jean-Claude Van Damme, through the 80s and 90s, most certainly did his fair share of bad films. I would venture to guess that by classical film critiquing standards he most definitely never did a 'good' film, even if I love his career that ranged from awesomely bad ("Cyborg") all the way to big budget awesome bad ("Universal Soldier"). Yet nothing in his career had prepared me for "The Quest." In my own quest to work through Van Damme's film career chronologically, not even the hilarious film atrocity that is "Street Fighter" prepared me for the terribleness of "The Quest."

Chris Dubois (Van Damme) has had it rough in his life. He lives on the streets trying to protect the young kids under his guidance and when a theft goes wrong he has to run from the mob to keep the kids safe. After being rescued by a high end con man/pirate (Moore), he ends up helping to devise a plan to win a massive martial arts tournament.

Don't worry if that synopsis doesn't make sense. The film doesn't either. As much as it attempts to give rhyme and reason to the ridiculousness of its plot, none of it really makes sense as characters do very asinine things for the sake of moving the plot. To begin with, did we really need another hidden martial arts tournament film? Not only that, but the reasons for Van Damme's character to even be there are shoddy in structures and rarely believable. Add on top of that a terrible romantic subplot with the leading lady (who has a truly flat character) and a vomit inducing and supposedly funny sub plot featuring Moore and McGee as bumbling con men and you have a recipe for disaster even before it hits the screen. I mean seriously...street orphans?!

From there, it only gets worse. Van Damme must honestly be a terrible director because he couldn't even make himself look good. Not that acting has ever been a highlight of his early career, but even the action sequences are poorly shot with some of the worst pacing on the planet. Outside of seeing Van Damme in full clown make up running from cops on stilts in the opening, not a single action piece is memorable. The fights at the end are rushed and often poorly choreographed which only adds salt to the wounds. The acting might even be worse. Van Damme phones in his own performance, Moore is obviously disinterested in the film, and even the underground Blood Brothers favorite James Remar gives one of the worst performances of his career. It's like watching the film version of a car wreck. It's horrifying through and through.

That being said, I do have to give this film a rating of one for the simple fact that its so unintentionally funny in its awfulness that I had fun watching it. Never did I find the humor in it funny, but the seriousness of its silly plot, the terrible lines delivered, the attempts at being "cool" in the action...it's all a riot if you go into it with the right mentality.

Even as a big JCVD fan, I have to say this is one to skip. While "Street Fighter" might have been a horrid film in its own right, it was at least campy enough to feel like it didn't need to be good to be entertaining. Outside of the unintentional humor, "The Quest" has nothing going for it. Not a single thing. I only suggest watching this as a party favor for you and your friends to laugh at.