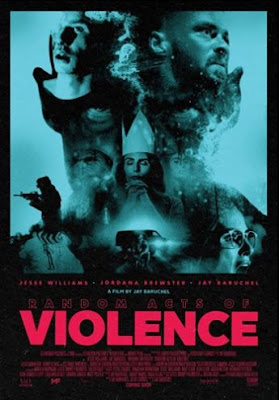 The boom of comedian type actors, writers, and filmmakers making the leap into horror lately is fascinating. Not that the change-up of genre is shocking, in so many ways comedy and horror have an incredible number of elements in common, but that’s more or less for a fully separate discussion. What makes it fascinating is that the industry is not only making the connections between the two, but it – in some regards – is fully embracing it. Between the rise of Jordan Peele as one of the faces of modern horror to the combination of David Gordon Green and Danny McBride on Halloween ’18, the combination has proven to be successful in quality and in the box office.

Perhaps this is why it was a bit shocking to see Jay Baruchel’s sophomore effort not garner more attention. Random Acts of Violence, also written by the long time Seth Rogan gang collaborator, sees the actor/writer/director strut into the slasher genre with a modern sense of style in spades. Telling the story of a comic book author Todd (Jesse Williams) who is struggling to write the last chapter of his slasher comic Slasherman, he takes his boo, his manager, and an intern on the road to promote the comic while desperately trying to come up with an ending to the series. When a real slasher killer, the inspiration for the comic, starts to follow them on the road and recreating the kills from the comic, the group and Todd will have to reckon with reality, fiction, and how the two eventual collide in bloody ways.

Once the film starts moving into its story, it’s obvious that Baruchel has an innate understanding of the slasher genre. Random Acts of Violence is a film that one might consider a ‘meta’ or post-modern horror film in how it approaches the material. These are characters in the world that understand the manner of a horror movie or, more aptly, a horror narrative thanks to their comic. In this regard, the film operates already on a multi-level system that feeds well into its more surrealistic elements. As the plot unwinds, the tone of the film increasingly becomes more dream (read: nightmare) like in how it feels. Less of the plot makes sense, the style of the film becomes more artistic and bolder, and by the third act it has completely unhinged and collapsed into swaths of pure visual potency with little intention in wrapping up the plotting in any real definitive manner. It’s a brash and often lofty choice that will certainly draw a line for many of its watchers, although for me it’s blissfully well done and hits on my personal horror preferences.

Outside of Baruchel’s choices as a director and writer to focus on the spiraling dreamlike elements, Random Acts of Violence will also satiate the slasher fan’s needs, but not quite exceed them. The actual plot points, where the villain of the film starts to replicate the kills of comic, lends itself to some brutal moments befitting of the film’s title. The first major kill, referred to as the ‘trinity’ in the film, is a punch of viscera even though it’s not shot or unveiled in a truly exploitative way. Random Acts of Violence leans heavily into that early 80s slasher grindhouse tone at times (just look at the grittiness of the opening titles for a very simple and effective example) and it’s here that perhaps the film could have pushed itself a bit further. Baruchel is far more interested in the art aspects of the grindhouse concept than delivering those key impact moments of horror. The balance is effective, but for those perhaps looking for more pour n’ gore, the film does occasionally step back.

All in all, Random Acts of Violence is certainly a pleasant surprise of the year. Baruchel is definitely a huge fan of the slasher, rolling the classic elements of the genre in a post-modern way that deliberately begins to unravel as the characters further stumble down the rabbit hole of their own making. There are some intriguing themes and ideas under it all, particularly when it comes to fictionalizing real horrors for the sake of entertainment, but the film plays so vaguely that it doesn’t quite hit with its full force. Still, most of those items are nitpicky and Random Acts of Violence plays its cards with impeccably surprising skill.

Written By Matt Reifschneider
Posted by DarkReif at 8:30 PM