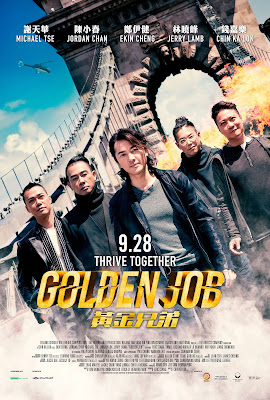 Hong Kong action cinema is evolving. For many fans, it hurts. They don’t want the classic feel of the films to be changed in anyway, which is problematic in its own ways, and they don’t appreciate that the genre is starting to add in new influences to the mix. This is what makes Golden Job an interesting film. At its core, there are a lot of old school influences. Not only in getting the gang from the 90's Young and Dangerous franchise back together, but in how the film embraces its subject matter and some of the foundations of the script are a love letter to an older style. It’s also a film that is heavily influenced by the new Hollywood blockbusters that have been making huge waves in the Chinese market, most obviously the Fast & Furious series. The combination, while odd at times, is still fairly charming and extraordinarily entertaining. Golden Job is a perfect storm of old and new, taking modern action influences and grounding them in classic Hong Kong action tropes. It’s a flawed film overall, but Golden Job pulls a heist on all the entertainment and delivers on all the best Hong Kong cinematic cornerstones of action, heart, and comradery.

Essentially, there are two pieces to talk about with Golden Job and it’s only fitting to talk about how the film connects with classic Hong Kong cinema first. Director Chin Ka-lok, whom many HK fanatics will know from a multitude of classic HK films as an actor, stuntman, and director, takes the reins of the film and showcases his knowledge of HK cinema history with its foundations. The film is heavily rooted in classic themes of brotherhood, loyalty, and ass kicking. When the film is channeling the spirit of late 80's and early 90's heroic bloodshed films, that's when Golden Job is at its best. The key group of thieves, who are tested when they retire only to take on one last job to heist some medicine for sick kids and see it all go horribly awry, is fitted with the previously mentioned troupe that was made famous in the 90's Young and Dangerous films. Their on-screen chemistry is impeccable. This allows the film to hone in on this sense of brotherhood and their eventual familial bonds fantastically ground the film. There are some great performances in the group and Golden Job knows its audience by throwing in a few iconic names – Eric Tsang and Kurata Yasuaki – whom both also have some memorable moments. The film plays with its narrative a bit, loving to jump forward in time and flash back when needing to explain something further, which is not all that unusual for the style of film being presented here. It doesn’t always work the best, particularly in the latter half of the film as there gets to be a tangle of various subplots that can be lost in foray, but it’s not entirely unexpected.

The bridging gap between the new and the old comes in the form of the action sequences. Golden Job certainly has its fair share of older style gun-fu, again as an homage and love letter to the classics from John Woo and Ringo Lam, and when those are on display is when the film, again, shows its best self. In particular, there is a fantastic team siege on an island fortress in the finale that is pure adventure meets adrenaline pumping action that HK fans will be highly entertained by and this allows the film to end on a strong note. The rest of the action in the film suffers a bit from trying to interpret modern action for a HK audience. Namely, Golden Job desperately wants to kick start a franchise that mirrors a lot of the style and approach of the Fast & Furious films. It loves to use its diverse international locales, from deserts in the opening to Budapest to Japan, and it injects a couple of insane car chase/action set pieces into the mix. The first, where our heroes stage a heist in Budapest and end up in a full-on car chase, is actually a fun mixture of the two styles. It’s outlandish and often completely throws physics out the window, but if you are willing to overlook some of the horrendous CGI then the sequence works. The second one, a neon lit night chase in the latter half of the film, is not nearly as effective. The use of flashy cars, poor CGI, and strange pacing all make it a rather baffling scene more than anything else. This is where I was stricken with flashbacks of seeing The Fast and the Furious: Tokyo Drift for the first time and needless to say that is not a good thing.

All in all, despite some speed bumps in the CGI, some mixed efforts in the action sequences, and a spotty narrative filled in by plenty of illogical leaps of faith, Golden Job is still uproariously entertaining. Chin Ka-lok handles the mixture of old and new with a lot of flair, maximizing the fantastic cast with their on-screen chemistry and punctuating the film with plenty of high-flying action to sell its story about thieves with hearts of gold. This is a film that may get a lot of fans of older HK action cinema to scoff too much at the modern influences, but its effective use of classic heroic bloodshed foundations ground it well enough to show that evolution is not necessarily a bad thing when your roots still keep you in the right place.

If anything, I sincerely hope that Golden Job kick starts a new franchise.