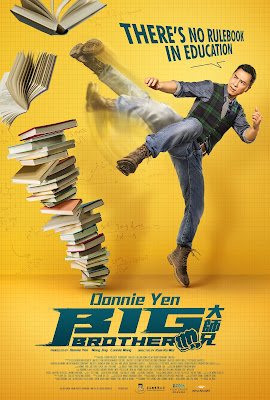 Donnie Yen is a huge star. Large portions of the world have no idea, which is a shame, but he really is one of the hardest working and busiest actors out there. Because of his insanely busy schedule, he has his pick of a variety of projects and it was a bit surprising that Big Brother was one of the films he chose to focus on. A family friendly drama/comedy/action film? Of all of his options, he chose this one. Now that the film is out, both in the US and China, it does make sense why he did. For all of the kinds of films he has done, dramas, comedies, action, he has yet to really make a film like this and that variety can be appealing. His fans, however, may not be as welcoming to the film since it does have a largely different tone than the rest of what gets a US release. The film takes a decidedly family friendly tone with its material, focusing on a handful of kids in a struggling school more than anything, and it doubles down on the ‘you can do it!’ catch phrase that Donnie Yen’s character repeatedly says with a huge smile on his face and a self-reassuring fist pump. As much as the film plays things in very predictable ways, it’s hard not to enjoy its charms on some sort of level. Big Brother is shockingly fun and if I was a kid, I would have been obsessed with this film.

This time around, Donnie Yen plays an ex-marine named Henry Chen (a US marine, nonetheless, which is an intriguing choice,) who opts to try his hand at helping the next generation with their education and give them a fighting chance to be productive members of society. His non-standard approach to teaching, where he sets off fire sprinklers, spends all of his free time going to his student’s houses, and generally being a ‘Mr. Fix It’ for all kinds of social problems, is both heartwarming and often at odds with the school and other parts of society. This leads to all kinds of humorous and occasionally action-packed sequences. Montages, James Blunt songs, colorful sequences featuring MMA fights or go-carts, and even ukuleles can all be found in this film. Sounds cheesy? You have no idea. Wisconsin would be jealous. It’s also insanely predictable, often illogical, and generic with its themes and ‘wisdom.’ As the film goes on, it’s best to keep in mind that it is obviously meant for families of all ages. It makes it a bit easier to swallow.

The trick of Big Brother is that, while Donnie Yen’s miracle worker is certainly the protagonist that drives the narrative, the film takes the time and effort to try and define a handful of students for him to help. Naturally, the film does not have nearly enough time to flesh most of them out in ways that are truly as dramatic as it pretends they are, but at least it tries and that does say something. Each of the students has their own ‘challenge’ before them, whether its an alcoholic parent, gender pressures, the color of their skin, or mobsters (we’ll get to that last one here in a second,) and through the power of the all mighty Donnie Yen, these kids will find their way. The family friendly approach means that even though it touches on a lot of sensitive subjects, it never actually explores them and just glazes over them in an After School Special manner. Most of the problems that arise from the exploration of these characters and their events comes from the lacking time to develop any intricacies with them and how strangely easy they are solved. Truly, Donnie works miracles and after one conversation, a life time alcoholic will change his life or an overbearing father will throw away his preconceptions of what he wants his daughter to be in life. It’s almost embarrassingly simple in a lot of ways and it flaunts the easily consumable nature of being a family friendly film most blatantly in this regard.

Naturally, because this is a Donnie Yen film, there is bound to be at least a little bit of action and, while most martial arts or action fans will be disappointed by the smaller amounts included – or how long it takes to even get to the first one, when they arrive they are blessedly awesome. The first one presents the audience with a locker room brawl between Donnie Yen and some MMA trainers/fighters. Granted, the reason the fight even exists in the plot is loose at best and gimmicky at worst, but as it happens it’s hard not to love every second. The fight work is impressively choreographed and shot, it’s an electric combination of fun and hard-hitting modern fight design, and highlights the strange value of the film’s bright aesthetic and the traditional beat downs expected from its star. There is only one other fight sequence after this, both of which are developed by Yen’s character trying to help one of his students get out from the grasp of some gangsters, but even that one is impressively executed. The resident film villain, played with tongue-in-cheek delivery by Yu Kang, has a rather vicious fist-to-cuffs with Yen that results in an asinine pile up of students desks that are being crushed, broken, and utterly destroyed for our amusement. Both scenes are outlandish and make it worthy of seeing the film.

Considering that this film comes from director Kam Ka-Wai, a director who has only recently stepped up to lead director and has made four film in the last 2 years (!) including the very anticipated Colour of the Game, there is a part of me that expected Big Brother to be worse. It’s a rather unique film for Donnie Yen (although Kam served as assistant director on a variety of different style films and plenty of them with Yen) and the combination proves to be both insanely cliché and yet impeccably charming. Thanks to some great cheesy performances, some phenomenal action, and a tone that never says that this film was ever meant to be more than a family friendly endeavor, Big Brother deserves a look. It’s hardly a great film, but it wears its charms on its sleeves.