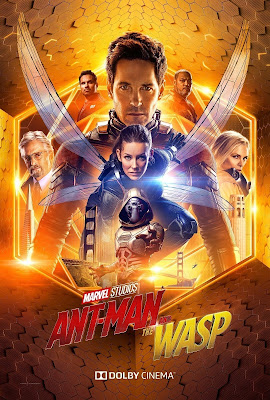 As much as I thought the first Ant-Man film was, you know, ‘just fine,’ the choice to drop the sequel, Ant-Man and the Wasp, after Avengers: Infinity War was inspired. The last Avengers film inherently took the Marvel formula and undercut it by inverting the role of the protagonist and taking the series into some shockingly serious and darker territory, but Ant-Man and the Wasp represents the polar opposite. This is a film that doubles down on the Marvel formula instead of trying to subvert it and the film changes the pace from the last MCU film. It's a welcome maneuver after the impact of the last film. Like the first Ant-Man film though, Ant-Man and the Wasp is a mixed bag of execution, once again being a film that’s certainly enjoyable, entertaining, and easy to consume, but it’s also a film that falters from some of the same problems that prevented its predecessor from hitting its potential heights. Fans will definitely find plenty of things to love in the light-hearted demeanor and outlandishly silly premise, but compared to some of the more intriguing paths of the MCU in the last handful of films it does pale in comparison.

This time around, Lang, played by the always charming (except in Halloween 6) Paul Rudd, is trying his best not to get into trouble towards the end of his two-year stint on house arrest after the events of Civil War. There’s a sense that there have been significant events that have happened between his last cinematic appearance and now. Even though Lang has a security company and there is seemingly some bad blood between him and Pym, reprised by Michael Douglas, the film doesn’t really address these elements as much as focuses on the current story on hand. This is not inherently a bad move, simply because Lang and the other characters are portrayed better in the moment, but the film loves to reference the missing information in comedic ways that feel more like a gimmick than building any kind real sense of depth. This does helps the film keep its entertaining pace, as it leaps from obstacle to obstacle. Ant-Man and the Wasp works best when it starts playing the race against time card, which pops up here and there for a strong sense of urgency, but the narrative does meander a bit too much to maintain the sense of energy required to flow the way the film wants. A sequence where Lang has to infiltrate a school to retrieve an important item is one of those times where the film seems more interested in the funny moment then what it does for the whole. It makes the film entertaining, but hardly as cohesive as it might have been.

The biggest issue that arises in the film is one that plagued the first one only a handful of years ago. Ant-Man and the Wasp loves to hint at important themes within the narrative, but it has no idea how to create the emotional connection between the parallels to get them to work. Where the first film had a great idea with a parallel father and daughter relationship that it failed to capitalize on, this one wants to desperately run with a parallel plotted theme of patched together families. Between Lang’s own role as a third wheel in his family, the focus on finding Pym’s wife in the Quantum realm, and even the familial relationship between the film’s two villains, Ant-Man and the Wasp has a lot of great material to work with and it consistently feels underdeveloped. There is a disconnect that exists between these threads where none of them come to the surface in any real meaningful way. There’s heart in each, some key moments work, but it never reaches that level of thoughtfulness that could have elevated the entire experience.

Fortunately, Ant-Man and the Wasp has a lot of charm up its sleeves to appeal to fans and in these regards the film has the upper hand on the original. The film’s brisk pacing and fantastic casting only add to the entertainment that it provides. In particular, an increased role for Lang’s right hand man played by Michael Peña brings with it a welcome sense of comedic timing. Walton Goggins appears as a rather underutilized but always welcome villain and Laurence Fishburne is always a bright spot in any film. The action is crisp and dynamic, balancing the visual fun of the concept and finding new ways to recreate the size shifting action with new levels thanks to the addition of The Wasp, and the film combines this all with quick wit and a slick pace that benefits it all. On the surface, Ant-Man and the Wasp is a very fun and enjoyable popcorn superhero film that fans will definitely eat up for its bright, colorful, and twinkle-in-the-eye approach.

In the end though with its best efforts and stronger sense of identity, Ant-Man and the Wasp does feel a bit too bubble-gum to reach its potential effectiveness. If anything, there is even more potential to this film than the first one, particularly in developing the villain and the use of the patchwork family concept, but the film just doesn’t grasp it as it throws in as many humorous sequences and colorful action-packed moments as possible. The charming performances and great pacing help the film immensely, but there remains that lingering sense that there was always more to this film than what was delivered. As the MCU continually finds ways to re-invent the formula in slightly different ways and finding a balance between blockbuster entertainment with a sense of artistry, Ant-Man and the Wasp remains a reminder that the genre was a bit too much fluff at one point.