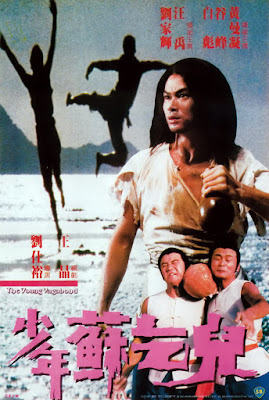 One can tell that the Shaw Brothers studio was panicking by the time the mid-80s rolled around simply due to the unfocused films they created. The 80s did produce some of their most entertaining (and solidly crafted) films too, but the majority of the material being produced seems to pale in comparison to the heights of the studio in the 1970s. The Young Vagabond is a film that had so much potential. Whether it’s the stellar casting or the ambitiously fun concept of telling the origin story of one of China’s best folklore heroes, Beggar Su, The Young Vagabond could have been one of those cornerstone Shaw Brothers films that fans fawn over for decades down the road. It could have been. It should have been. Instead, the film tends to stumble over its own feet in finding a tone and balance. Leaping from some drawn out subplots to dramatic emotional material with little in regard of fluidity. The Young Vagabond has some very intense and well executed moments, but they all sit in a film that doesn’t quite know how to put it all together.

Naturally, the main draw of the film is seeing the legendary Gordon Liu as a young Beggar Su, portrayed as the rough around the edges eldest son of a very influential wine maker. The character of Beggar Su has been portrayed in a variety of ways throughout the years by some very striking actors and in some very diverse films, but seeing this attempt at giving the character a fresh and youthful start (similar to how Jackie Chan portrays Wong Fei Hung in the first Drunken Master film) does come off as fun and refreshing at times. Liu works impressively in the role and the one thing that The Young Vagabond does well is it lets him really settle into the part to deliver a wide range of character choices. The character goes through all of the emotions, has plenty of fight sequences to deliver on, and gets a handful of humorous set pieces on top of it all. It’s obvious the intent of the film was to give him a large journey to get him to be the Beggar Su that’s more traditionally known and it’s ambitious so for that the film earns some credit.

This is also where The Young Vagabond tends to self-destruct too. It simply wants to do too much with not enough time, energy, and focus to pull it all off. The film attempts to give the main character a ton of emotional investments, the family business, his brother, his girlfriend, his studies, his teacher who starts to secretly train him in Drunken Tiger style, and it spends more time flipping through them all instead of focusing on one or two to truly drive the narrative. This leads to an often meandering and unfocused flow to the film. An entire subplot featuring his girlfriend’s father, played by Shaw Brothers cornerstone Ku Feng, is quite funny with strong chemistry between Liu and Feng, but it ultimately feels like padding in a film that doesn’t optimize the sequence or the use of the father figure. Add in the rest of the required fight and comedic sequences (Shaw Brothers really forced a lot of useless slapstick comedy into their films by the mid-80s to keep up stylistically with their competitors) and the film becomes a jack of all trades and a master of none.


The Young Vagabond does have enough charm and effectiveness within those moments to sell itself as a decent watch. As mentioned, Liu gets to anchor the film, but he’s surrounded by a who’s who of Shaw Brothers stars. Ku Feng, as mentioned, shows up for a scene stealing minor – almost cameo – role, Johnny Wang pops up in the second half to solidify the villain for the film, and the always undervalued Jason Pai Piao gets to throw down plenty of action and still be the quirky mentor. The chemistry of the film, even when stretched in terms of the romantic plot, carries it through a lot of its problematic narrative and writing flaws. On top of that, most of the action is top notch too. Gordon Liu doesn’t really get to unleash his stuff into the finale with Johnny Wang – although seeing the duo knock it out is always a sight to see – and most of the best material comes in the form of Johnny Wang duking it out with whomever, including two brief but memorable bouts with Jason Pai Piao. The first third of the film is more dedicated to the slapstick humor and street fights of the Su brothers than more traditionally filmed and choreographed fights, so there is that.

All in all, The Young Vagabond is an entertaining film in its own right, powered by a fantastic cast, some fun fight sequences, and an ambitious and fun concept about showing how Beggar Su came to be the folk hero of legend. The problem is that the film is too ambitious and tries to add too many characters, plots, and genres into the mix to let the film define what it wants to be as a martial arts film. With the better aspects of what it provides, it can be easy to see why The Young Vagabond has its cult following that love it. Outside of its fans, it’s too scattered to be in the upper echelons of Shaw Brothers films.