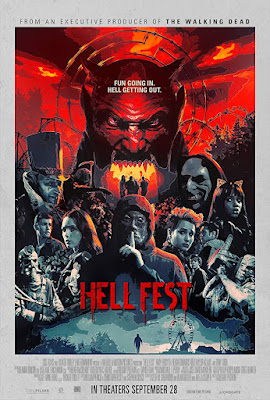 To kick off the October horror viewing schedule a little early, it seemed like Hell Fest might be the ticket. It’s a colorful film, takes place around Halloween, uses a great looking extreme haunt setting, and hark back to an old school slasher approach to things. In those regards, yes, Hell Fest is a fun way to kick off the season. Gregory Plotkin ably uses the visuals nicely, saturating the entire film in Argento like swashes of bright colors, generally having fun with its concept, and builds a great set for the events of the film to take place. The film spends little time outside of the haunt, opting for a brief introduction of a couple characters and then moving into the haunt, aptly named Hell Fest, within minutes of the film starting. From there, it launches itself into slasher territory as our young adults, a series of couples nonetheless, proceed to find themselves stalked and slaughtered by our masked man. Cut, slash, paste, repeat.

The problem with Hell Fest resides in the film’s lacking ability to create any real foundation for the style to work. Its attempts to hark back to the classic era of slashers is problematic because, and I’m sure I’ll get flack for this from readers, most of the 80s slashers didn’t have great plots or characters. This film would have been one of those B-grade slashers even in the 80s and its lacking sense of tongue-in-cheek do it no favors in a modern way. There are moments where the film attempts a subversion of the genre, playing on the audiences’ expectations in fun ways, including a few of the death sequences which was a fun surprise. However, moments do not a great film make and the lacking depth of characters or real plotting hinder the overall experience. For those looking for a fun, silly, and consumable product, Hell Fest abides. It does not live up to its R-rating though as the film steers away from some of the more potentially fun gore set pieces and only gives glimmers of it. More of a rental film than one to immediately see in theaters. 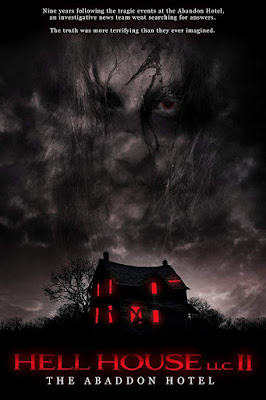 As time has gone one, the found footage horror saturation of the market has finally started to wane. It’s not gone, that will probably never happen considering how cost effective they still are overall, but it has finally receded enough to give horror fans a break. When I first had heard of Hell House LLC, I wrote it off as just another cheap release to capitalize on the fad of the style, but when I eventually saw the film it became clear that it was not. Hell House LLC was a gem with a fantastic and simplistic idea, maximized by wonderful timing, great atmosphere, and relatable characters. As the film garnered a cult status, it wasn’t all that shocking that a sequel would eventually be announced even if the first film worked impressively well as a stand along story. Now we have Hell House LLC II: The Abaddon Hotel, which premiered on Shudder, and the mythos of the titular hotel is going to be explored more thoroughly with this entry as a new team, led by one of the surviving members of the previous bunch, head back into the haunted hotel for answers. The results, while still retaining many of the things that made the first film such a spectacular find, is a more mixed effort.  When the film works, it’s a sight to behold. Director Stephen Cognetti still knows how to create a sense of unnerving effectiveness of timing and subtle scares within a camera shot and once the characters get to the Abaddon Hotel, there’s some fun scenes to be had. On top of that, the film takes an ambitious spin on building the mythos by adding scenes that were not covered from the time of the first film and creating all kinds of new threads to weave between the characters and this film. This is mostly done with how the film cuts between the footage of the new team going into the house, an interview with one of the characters post incident, and a cheesy TV show where they interview various characters and have them debate the realism of the events of the first film.

Unfortunately, Hell House LLC II can be a bit too ambitious in build these threads and it feels like the film is desperately laying more ground work for further franchises than necessarily telling its story. Where the first film succeeded was in its simplicity. This entry sacrifices that for the sense of world building and the results can drag out and feel too meandering for the sake of an efficient and effective narrative. This includes an entire subplot for a paranormal celebrity character that wants in on “the fame” of the story and ends up with the team going back in…and only feels like padding for the sake of building the story. The performances can also be a bit hit or miss, overall, although for a low budget film like this they are more par for the course than all that disappointing.  Considering how good the original film is, it’s hard not to find Hell House LLC II: The Abaddon Hotel disappointing, even if the film still has some impressively executed merits as a haunted house/found footage horror flick.