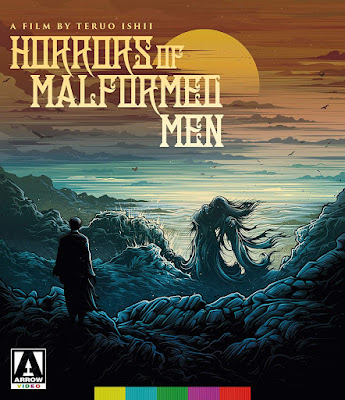 As a cult cinema addict, it is always fun to find the strange and off kilter pieces of film that exists. If you want strange and off kilter, then Teruo Ishii has to be a staple of your queue. That’s just how it’s going to be. A lot of his material has become hard to necessarily find over time though and when Arrow Video first announced that their Blu Ray release of his cult classic, Horrors of Malformed Men, would be the first of a handful of new Ishii titles, it was a welcome announcement. This title, which is generally regarded as one of his classics in many film social circles, is a great way to introduce someone new to his material. It’s an insane film, one that starts off half cocked then seemingly finds a more traditional story telling groove before leaping off the cliff of logic at the end, but it’s also a film that can be appreciated for its abrasive tone instead of being completely off putting. Horrors of Malformed Men is a strange film, but charmingly so despite many of its issues. Ergo, the perfect kind of cult film. It’s a film that perfectly aligns with fans of Arrow Video releases.

The one aspect of Horrors of Malformed Men that can be the strangest one, outside of the visual elements which we will get to in a moment, is how the film plays out its structure and narrative. The film is designed with a classic three act frame, but each of them is very specifically designed for a tone and feeling. In some ways, the first and third act, are similar, but the second act takes a drastic shift in tone that can disengage the audience. However, no matter how similar or different each act is, they are meant to play with the audience’s expectations of reality and work as a strange and potent mixture. The perfect example of how a film can work with its flaws.

Firstly, let’s start with the first and third act of the film. Both bookends to Horrors of Malformed Men feature nightmarish visuals and a sense of disconnect from reality, driven by the lead character Hirosuke who will remain the path for the audience to understand (or not) the world that he exists in. The film opens with him being imprisoned in a cold and barren mental institution and no recollection of why, how, or when he ended up in this predicament. Right away, Teruo Ishii establishes this sense of nightmarish imagery and establishes its theme where nothing is what it seems as our protagonist is thrust (with the audience) in a barred room filled with a bevy of women – all seemingly lost in their own world and where one of them stalks our protagonist with a knife. This sense of being off balance is one that the film retains through this first act and, as the narrative moves into the third act which takes place on an island filled with strange “malformed men,” it batters the audience with its unbalance. When reality is revealed to be as nightmarish and disconnected as the rest of the film, through the often horrific and oddly humorous visuals and beats of the film, one can see why this film has achieved cult status. Both acts are filled with strange set pieces, whether it’s the asylum of the opening, a brief stint at a carnival, or the island of misfit people, and Ishii intentionally films things in a reality bending manner that will leave the audience asking ‘what the fuck is going on?’ more than anything else. This is the style that Ishii is known for and this film delivers on it in spades, even going so far as to end the film on one of the strangest imagines I have ever seen in cinema.

This is just the first and third acts though, so naturally, what makes the second act so different? The second act, where our protagonist pretends to be the recently passed heir to a wealthy family after spotting a picture in the paper where the two look exactly alike, takes a careening left turn from the visual and tonal style of the other two acts and evolves into an identity thriller. It’s at this point that Ishii showcases his ability to navigate tone and genre shifts like the true master of weird that he is. This act is punctuated be a strange noir thriller vibe, going for a more classical thriller lens, while the protagonist’s paranoia about being caught and playing into this role becomes the focus as he attempts to unravel the mystery of this family in front of him. The film maintains this sense of binding what’s real and what’s unreal, a theme that carries through the whole film, but stylistically it might as well have been from a completely different film.

Where Horrors of Malformed Men does struggle is getting its ambitiously odd concepts and shifting tones and style to flow. If you’ve seen Ishii films before, you already know that part of his appeal as a director is that he seemingly gives no shits about this issue. Granted, the strange leaps are not as drastic or gut punching as something like Blind Woman’s Curse, but the film does stutter in developing the ongoing drama between the acts. The performances range from impressive to baffling - intentionally so, whether it works or not in the latter, which helps to carry the film. Nonetheless, the film does give off a lot of mixed signals at times (even within a single scene) that can undermine the overall intent of the film.

While many of the other Japanese films that Arrow has been releasing lately seem a bit sparse in their features, Horrors of Malformed Men is locked and loaded to appease fans. Not only is the film a new 2K restoration, but the film has two (!) audio commentaries, a couple of interviews, and another wonderful booklet with a fun analysis of the film. The film looks phenomenal and the features add a lot of colorful detail to interpretations and context for the film to exist in. A list of the features is included below. This is a film that's ripe for exploration and this release is packed with great analysis.

Horrors of Malformed Men is, without a shadow of a doubt, a cult film through and through. It’s stylish, odd, and never doubts itself as it unleashes its thematic heavy and completely bat shit tale. It’s also a film that is so intent on its narrative, style, and wild approach that it forgets to effectively pull off its plot or develop all of the characters in a way to maximize its impact. It’s hard not to love it on some level due to the sheer intensity of its strangeness thanks to the talents of large portions of the cast and some insanely effective directorial moments from Ishii. If anything, with its flaws, it almost becomes more enduring of time and it deserves this kind of treatment that Arrow Video has given it. Horror of Malformed Men is a cult classic in all of its glory and this latest release is the best way to experience the horrors it contains. 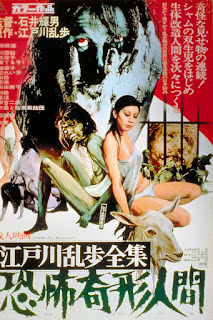