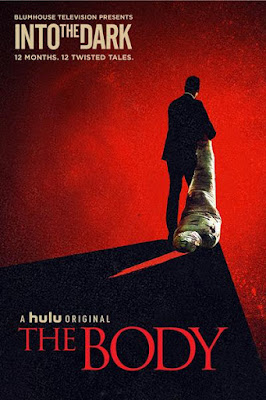 The concept for The Body does lend itself to being more than the usual horror thriller and the focus of the film has an effective amount of genre bending. The core of the film remains grounded as a horror thriller where an almost inhuman hit man stalks and slaughters a group of young adults when they cross his path and end up in his sights. Director Paul Davis plays up some fantastic kill sequences that lean into the slasher territory, particularly in the third act, while the use of the various settings work to create a moody atmosphere that horror fans will more than appreciate. Partner this with a strong sense of tension and great use of lighting to develop tone and there is a lot of horror elements to enjoy in The Body.

Surprisingly, the best part of the film is just how effectively it uses humor in its plotting and narrative. There are some unique genre elements present in the film, in particular when it comes to a strange and weirdly hypnotic romantic subplot, but it’s the humor that truly shines here. The stoic approach of the hit man, the panic of the people that accidentally cross his path and end up with the titular body, and the surprisingly fun banter and wit of the writing all create a film that’s a riot to watch. The narrative moves briskly from each obstacle as a cat and mouse game arises in the second and third acts and the dark humor mixed with energetic performances only create more entertainment out of the concept. It's horror at its heart, but it wears its blackened humor on its sleeve with pride.

Considering that The Body was crafted as a longer version of a short film also from director Paul Davis, there is a lot of quality and entertainment to be found in this debut film for the series. It’s easy to watch, incredibly entertaining, and it finds that perfect balance between hilarious and shocking. It features energetic performances and a wicked sense of wit that carries it through some of the more predictable tid bits. If the rest of the Into the Dark series continues with this quality, this will be a phenomenal win for both Hulu and Blumhouse during this high tide of horror.

Color me very excited to see what the next entry has to offer in November.