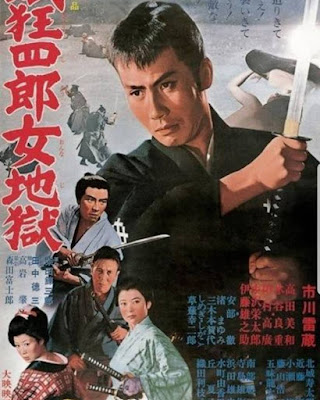 As I continue my stint in reviewing the seemingly unending entries into the Sleepy Eyes of Death franchise, it’s fascinating to see what themes and threaded narrative elements come seeping through the various adventures of Kyoshiro as I start to head around the final bend. One of those threaded elements is how the main character, once again played with robust nuance by Raizo Ichikawa, retains a very complicated viewpoint and opinion of women. Often enough, it’s not a very positive viewpoint and I’ve mentioned this in some reviews prior. This aspect of the series becomes a highlight of the tenth entry simply due to its subtitle, Hell Is a Woman. Considering how generally nihilistic and misogynistic the lead character is, a title like this sets up a pretty extreme reaction. On one hand, Hell Is a Woman is not nearly as bad as it might have been in these regards, but on the other it’s par for the course in how it treats its female characters which only solidifies it as one of the major problems of this franchise. In the end though, the biggest problem of the film is not that it doesn’t attempt to fix this as it bounds straight into the topic, but that the film doesn’t make a statement at all in almost any regard. This leaves Sleepy Eyes of Death 10 as simply an unmemorable entry.

Sleepy Eyes of Death 10: Hell Is a Woman once again features our dark and irritable anti-hero Kyoshiro as he gets wrapped up in another political squabble. This time it’s two higher ranking politicians who are vying for power in the wake of the sudden death of the clan’s head. Quite literally, Kyoshiro simply walks into the mess in the opening sequence and gets caught up as both sides end up trying to recruit him and his unbeatable sword technique to gain the upper hand. Traps are laid, his hand is forced, the body count rises, a ronin challenges him, a princess of sorts gets involved, and Kyoshiro gets a little annoyed. All in all, it’s another Sleepy Eyes of Death film.

Before digging into the titular elements of the film, it’s best to start with gauging the film as part of the franchise whole and the stronger/weaker aspects of it in that manner. As mentioned in the synopsis above, this series has certainly found its formula and it is not straying from it. There are entries that are better and worse at going about it, but the main issue with Hell Is a Woman is that the film doesn’t do a whole lot to distinguish itself from the rest. The political aspects of the film are generally pretty muddy, particularly as it seemingly just throws names of characters at the audience (a sign that perhaps the film works better with an understanding of Japanese hierarchy of the time period that I sorely lack,) and many of the characters are seemingly throw away roles and underdeveloped to be as effective as possible. The narrative, as with the last one, just meanders too much in overly complicated ways and doesn’t spend enough time in the better sequences to let those resonate. When the film does have a strong moment, an almost heartwarming scene where Kyoshiro meets a woman and young boy on the streets, for example, it doesn’t sit with it long enough to establish that emotional connection. When that event comes back later to play, it’s almost an afterthought instead of a resigning moment for any character, let alone the already established cold and nihilistic approach of the anti-hero. The same goes with another character, a down and out of luck ronin with a cheap sword, who has so much potential as a character (and a few great lines) but eventually just fades off as a secondary plot point with little to resonate beyond that. 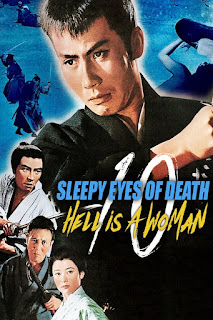 If there is one thing that Hell Is a Woman does well it’s that director Tokuzo Tanaka has a knack for using some of the settings in a strong manner to create visual interest. This is his first Sleepy Eyes of Death film since kicking off the series as a director of The Chinese Jade and he brings with it some great moments. A trap sequence in a foggy forest in the second act stands out as striking in a visual sense, even if it has almost no actual relevance to the plot, and the final 15 minutes or so is set to a beautiful snow-covered road. The final sequence is one of the best from the franchise though, so Hell Is a Woman has that going for it.  If only he was able to handle the narrative with any kind of focus, he might have been able to wrangle this film from being on the lower end of the franchise, but alas he mostly succeeds in smaller bits in terms of action and visuals.

As for the title and approach to women, Hell Is a Woman is not necessarily the worst offender in how the main character and the series treats women, but it certainly isn’t the best either. This is a shame because, generally speaking, there are moments where it might have actually added a lot of depth to the character and the plot had it taken it head on. The film features a princess of sorts, a character that pleads with Kyoshiro to take her to her destination, but instead of making her a strong character, she is sidelined for most of the film in as something of a subplot. A young woman and boy that he seemingly connects with in the first act? Sidelined as a plot point later on. Most of the other female characters, as with the majority of these films, tend to just try to seduce and kill him after he continually makes remarks about how he only views women as objects or means to an end. Granted, as I have burned through this series one does seemingly gleen an idea that Kyoshiro, as a character, is prone to say what he thinks will get the right reaction from whom he is speaking and that his beliefs are not as cold and mean as they are presented. He has moments where this misogynistic façade does crack a bit (remember how he essentially adopted a daughter to save her from prostitution? You know, that fascinating character development that is completely disregarded after it showed some great character arc in a previous entry?) but in this film there is never that nuance. It essentially just goes with the usual material of the series. Uninspired as it may be and it’s probably more of a sign of the times than anything else.

Sleepy Eyes of Death 10: Hell Is a Woman is a film that doesn’t do enough to stand out from the rest of the series. It has great moments, some great visuals, and the final 15 minutes are enough to make sure it does not capsize underneath its mediocrity and meandering, unmemorable narrative. The fact remains that at the end, it potentially could have been one of the best. It fails to reach that and falls down to being one of the less memorable entries in the series. Fans will still enjoy it for its adherence to the formulas they have come to love from the franchise. For the rest, it just falls into being a disappointment.