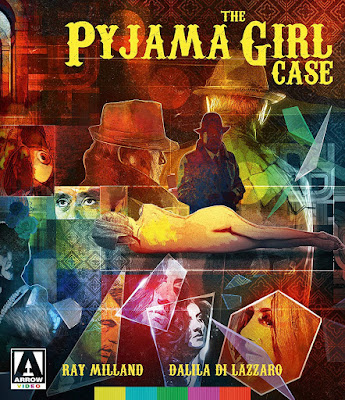 The first thing that should be mentioned about The Pyjama Girl Case is that, while it is often lumped together with the genre, this film has very little in common with most other giallo films. Granted, the term giallo is one that is broader that people often give it credit for, but there are certainly tropes that go with the genre that most fans recognize. Previously I’ve reviewed films that I would consider ‘fringe’ giallo, most recently I reviewed What Have They Done to Your Daughters? and Sergio Martino’s overlooked classic The Case of the Scorpion’s Tail both of which were released on Blu Ray from Arrow Video as is this film, but even those films have specific elements that would indicate at least some connection to the style and approach that the genre is known for. Mainly, through its use of villains. The Pyjama Girl Case has essentially none of those elements outside of being a murder mystery. No leather clad, sharp weapon wielding baddies. No amateur sleuths out of their element in a strange country. If anything, The Pyjama Girl Case actively avoids any of those tropes and focuses on delivering the most realistic version of the story possible with only moments of style that pop up. In this regard, it’s hard for me to even refer to the film as a giallo although it is often widely considered part of the genre.

With that in mind, The Pyjama Girl Case is a film that is loosely based on true events, so the approach that director Flavio Mogherini takes with the film in trying to make it feel as realistic as possible is not completely out of the realm of logic. The film is built on two narratives and two plots. The first is the police investigation of the titular character, an unidentified woman that is found murdered and half burned on the beach in Australia. The second narrative focuses on a woman, a waitress who is looking for more out of her life as she bounces between relationships with three men. The film makes a larger point of trying to keep the audience guessing at how the two stories intertwine, revealing plot points in synchronicity between the two narratives and using details build mystery between the two. The film leaps between the two stories as it goes, scene by scene.

In this day and age, this spiraling dual narrative approach is hardly new and for me the connection was almost immediately obvious between the two stories making many of the twists expected, but the approach is ambitious and rather inspired for a film that could have easily succumbed to leaning further into the straightforward exploitative elements that make up portions of the film. This execution of the idea is where The Pyjama Girl Case succeeds in spades. Not only does the film have some fantastic performances, notable ones include Dalila Di Lazzaro as the young woman who delivers an intensely ranged performance and Ray Milland as an elderly detective brought on board to help solve the case, but the film has some intriguingly fun thematic messages. It paints an intriguing spotlight on the strain and issues surrounding being an immigrant in a foreign country and the film even seemingly has a meta-layer to it when the police display the burned and naked corpse of the young woman on display and how people react to it. Granted, some of these themes have problematic layers to them that will give away too much of the plot to truly delve into, but the film does deserve some credit for attempting and occasionally succeeding at adding in a social commentary into what could have been a fairly straight forward film.

As with many of these more recent releases of Italian films, Arrow Video creates another set worthy of their reputation and one that will appease fans. The film features a brand new 2K restoration of the film and a slew of new features. There's a new commentary on the film and a few new interviews with critics, crew, and cast. In particular, I’m always a fan of commentaries, and the new one on the release from Troy Howarth is a fun one overall that adds a lot of context to those who are perhaps unfamiliar with the film and want to dig into it.

While The Pyjama Girl Case suffers a bit from focusing so much on its realism, only really using some thoughtful style to its opening and closing scenes, the resulting execution of the film in its narrative structure and effective performances more than make up for its dry tones as a whole. The film is a smart one in how it presents its story and its slants of social themes, even when a bit muddy overall, make for a film that deserves a few looks from both fans and more general cinephiles alike. The Pyjama Girl Case is one of those cult films that probably deserves a bit more credit than it gets as it is overlooked for more stylish and bombastic entries into the Italian murder mystery/crime/giallo genres. Fans of Italian cinema will definitely want to add this one to their collections.