There are a lot of cult cinema fans that love to talk about how films can be ‘so bad, they’re good.’ Naturally, the writing staff here at Blood Brothers do often use this phrase to describe our viewing habits, but like with most films even this is subject to personal taste. For many people, the films of Jess Franco fall into this realm of thinking and that is most certainly a valid opinion. No one is going to speak about his films as award winning fodder any time soon, but for me it’s even hard to say they fall into the category of being so bad they’re good. There might be a few that fringe on that line, but in the case of his jungle focused adventure sexploitation film, Diamonds of Kilimanjaro (or Diamonds of Kilimandjaro if you use the spelling on the film itself) or his other adventure flick Golden Temple Amazons, it’s not even close. These films are, for lack of a better description, completely incompetent. 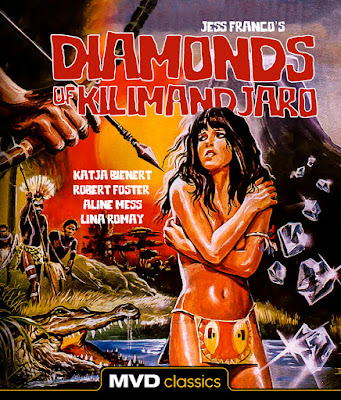 At the core of the film, Diamonds of Kilimanjaro might have been a fun adventure flick as it follows the exploits of some questionable hired guns and a crooked rich family that are looking for their lost niece in the jungles of Africa. With the right outlook, this might have been a fun idea if it had taken the tongue in cheek route of a Cannon Films project or perhaps a dark and vicious drama had the execution any artistry to it. As is, the film tries to be both. Diamonds of Kilimanjaro is completely outlandish and silly with its exploitation and strangely serious as it goes about it. It’s a combination made through sighs of disbelief and eye rolls of frustration while the tone and atmosphere succeed at being neither.

As if that wasn’t enough, the film is just perpetually baffling in how poorly it’s made. Not only does it look cheap as dirt on sale, but the performances are borderline offensively wooden while the dubbing remains some of the worst I’ve ever seen. The editing and narrative flow is completely mishandled, director Jess Franco has no idea how to build any kind of suspense or excitement, and the film uses the massive amounts of sex and nudity as a crutch to keep its audience even remotely interested in the film – which actively works against its tone to be taken seriously. The film is so poorly made, the same sequence where one character goes swimming and has to outrun a crocodile in the water is used twice…IN A ROW. It just has different sound elements. For some, these kinds of issues do create a lot of unintentional enjoyment. For me though, it was a torturous chore to even work through this film. 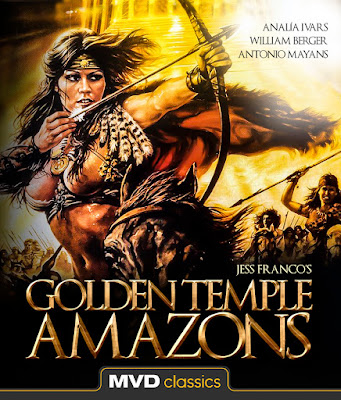 As the second part of this review, it’s time to look at the other Jess Franco Italian jungle adventure film that was recently released on Blu Ray by MVD Classics, Golden Temple Amazons. Firstly, the film is credited to another director, Alain Payet, under a pseudonym, but it is also noted that Jess Franco “helped” out with it in an uncredited role. Take that for what it is and I’ll leave it at that. While the film is probably a step above the previously reviewed film (just for its lack of jammed in stock footage,) this one is still a rather mundane and problematic chore of a film. At its basic plot, the film has a fun concept where a young woman is raised in the jungle and helps some explorers look for a lost gold mine inhabited by Amazons. Like the previous film mentioned, this one could have been a fun Tarzan inspired flick if it had some sense of fun or better execution. To its benefit, the film doesn’t meander nearly as much into exploitation territory to use as a crutch as it might have had (despite the significant amount of unnecessary nudity, which is par for the course in a Jess Franco film) and that is probably the best thing one can say about this film.

The rest of Golden Temple Amazons is a test of a viewer’s patience. The performances are confusing with a lead who seems completely unsure of how she should react to anything, the film has no idea what tones it wants to use as it bounds from comedy to adventure to horror (there is a scene with people tied over spikes that is just awkward and far too long,) and the low budget and plot only provide occasional humor for being so silly. The idea that these Amazons make everything out of gold is so funny. Gold prison bars? That’s not very secure with how malleable gold is as a metal. When the chimpanzee on set delivers the most inspired and relatable performance, then you know you have issues.

Granted, there is definitely an audience out there that will not only enjoy both Diamonds of Kilimanjaro and Golden Temple Amazons, but actively defend those films as great cinema. Jess Franco had an audience back in the day and he still has a very devoted and energetic following. For those people, these two films are definitely must adds to their collection. For those who are not as impressed with a reliance on exploitative elements, poor narrative pacing, and generally cheap and lazy film making, then it’s hard to suggest these. Keep that in mind and if you enjoy them, then I’m glad someone out there is.