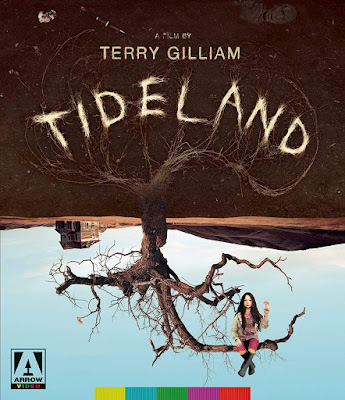 Terry Gilliam is a director who rarely sacrifices his vision of a film for anyone. That includes the audience. Sometimes it lends itself to a critically acclaimed film that finds a dedicated and enthusiastic audience (Brazil), sometimes it results in a rather intriguing cult film like Imaginarium of Doctor Parnassus, and sometimes it results in a film like Tideland. Even though the director has always pursued eclectic and unusual films for his filmography, Tideland remains the black sheep that never really found its audience. There are those out there that love the film, certainly, but for the most part this was a film that fizzled out due to diverse reactions from both fans and critics. This is also the reason that it was so surprising when Arrow Video announced that they would be releasing a new Blu Ray for the film. Gilliam has had his fair share of material released in iconic collectors’ releases (even the hit or miss Jabberwocky received a prestige Criterion Collection release,) but Tideland represents a film in his catalog that really does draw lines in fans. It’s also a film that is very much deserving of a reassessment now that the film is over ten years old.

Tideland remains a film that finds an often-unnerving combination of whimsy and unease that sets it apart from many of the other more colorful fantastical films Gilliam is known for. It’s not an easy film to watch and often brushes into territory that could be seen as very uncomfortable for mainstream viewers. However, this is a trait that has always been welcome from Gilliam (and one that is welcomed here at Blood Brothers) so as the film plays out in its somewhat depressing, strange, and weirdly fantasy driven manner, Tideland showcases that not all fairy tales are kid friendly – even when its main star is a kid herself.

Like most other Gilliam films, Tideland is one where the narrative and thematic weight of the film is far more important than plot. Trying to piece together the plot, which is inherently fairly thin, is often a chore itself as it is either thrown at the audience quickly or buried in character beats and narrative style. It follows the exploits of a young girl, Jeliza-Rose, as she continually tries to deal with the harsh reality of her life, where she comes as a low priority to her father, played with the sheer quirkiness expected of Jeff Bridges. This is hardly an overzealous drama where her situation is played for tears of sympathy for her plight. Instead Tideland is told mostly through her eyes, where the larger than life characters and their personalities are given almost outlandish exaggeration. In fact, most of the film is given this feeling. It’s as if all of the terrible things that happen to her, of which I will not go into much detail on as it might spoil too much, are seen through this lens of innocence and misunderstanding. Enough so that, as an adult watching it, it almost becomes more horrifying in the process. Whether its seeing her prep drugs for her father, her reliance on her imaginary friends to help walk her through more complicated scenarios, or even her byzantine (and occasionally very creepy) relationship with her neighbors, Tideland carries far more impact in its narrative than a film that attempted to tell the story in a more straightforward manner. It feels like a fairy tale where the main narrator has no true understanding of the impact and horrors as its told. Truthfully, it’s a brilliant angle.

Naturally, Gilliam slathers the film in his usual style. There is plenty of distorted visuals, camera angles that emphasize feeling more than realism, and the manner that it all unfolds can range from cartoonish (a clean the house montage is given a rather disgusting twist at the beginning, for example) to down right too real, particularly for the final minutes. The performances are all immense too. Most of the secondary characters are distorted in their characteristics, but a heartfelt and very ranged performance from Jodelle Ferland as Jeliza-Rose anchors the film in such a manner that it feels natural even when the film starts to careen wildly about in imaginative realms. The pacing of the film is where it does struggle a bit as it takes a long time to develop the details of its plot. There are large portions of the film where an audience may question what the purpose is of a specific scene or focus, but when a film is based more on perception and feeling, those questions are almost a given.

As it has become the norm, this Arrow Video Blu Ray release of Tideland rests up there with other collectors’ editions of Gilliam’s films. The new restoration is a much-improved step above the DVD that I had in my collection and the disc is jam packed with special features that dig into various interviews and plenty of material featuring Gilliam going over the film (with commentary even on the deleted scenes). The most interesting addition is that there is a 45-minute documentary on the making of the film that’s done by the vastly underrated director of Cube, Vincenzo Natali. Needless to say, if you’re a Gilliam fan, then the plethora of features only add a ton of great material about such a divisive film.

Tideland is not one of Gilliam’s best. With such a fantastic filmography, that’s a hard feat to begin with and it still remains a great film. The manner that it approaches its strange blend of fantasy, innocence, and horrific plotting with character and narrative elements is the perfect approach to create a significant divide in fans. After ten years, Tideland remains the same kind of abrasive and whimsical film it always was, but it’s a film that only gets better with repeated viewings. It also helps that Arrow Video has finally given it the treatment it deserves as a cult cinema classic. Fans of Gilliam will want to give this film another chance and this one allows fans and newbies to start sifting through the wonderful set of features on this release. Tideland is a hard film to digest, but it certainly is quite the fulfilling experience.

Written By Matt Reifschneider
Posted by DarkReif at 9:09 PM