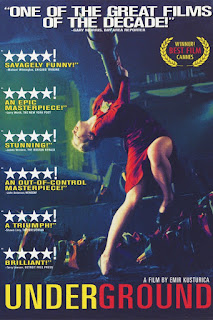 Winner of the Palme d'Or in 1995 at the Cannes Film Festival in France, Emir Kusturica's three hour historical satire dark comedy blew up to epic proportions in its popularity among the festival circuits at the time.  From what I understand though, there wasn't much English language coverage of the film for quite some time. Regardless, since the boom of intense film restoration for fancy quality discs for home media came about, Underground has went before the eyes of many and worked its way into the hearts of most. While I appreciate the large caliber of gags and insane camera work, I unfortunately didn't find much to latch onto whilst spending my time underground.

The sprawling story focuses on two friends and their relationship with one another that spans from the beginning World War II and last until the beginnings of the Yugoslav Wars. One is a Communist Party member who is working his way up the ranks named Marko. The other, nicknamed Blacky, who enrolls in the Party before WWII had even begun. The two hit it off and a serious of laughs, betrayals, battles, and visual gags come to us audience members at breakneck speed, not caring to leave us in the wind if necessary. 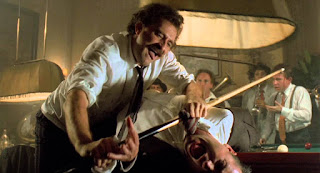 I liked Underground, but I know I wasn't in love. Perhaps I fell for the worst thing of all a movie goer can do: build expectation. I have had this one hyped up to me for so many years that I went in expecting, well who knows what and got nothing I really could be amazed by. Now, that isn't to say the film has no depth or won't land into anyone's favorite film lists as it clearly has many times. I do want to revisit sometime with the 6 hour television cut, which the lengthier version was the director's original intent, and maybe I'll discover a better appreciation. For now though, it just didn't really mesh with me.

In terms of the technical aspect of the filmmaking, everything is top notch. I was so impressed camerawork and the techniques used that even with that I was at times pulled out but more so just amazed by the level of craftsmanship displayed here. Whoever the cinematographer is most definitely deserves high praise. I wasn't quite sure how they pulled off some of the visuals they did honestly. 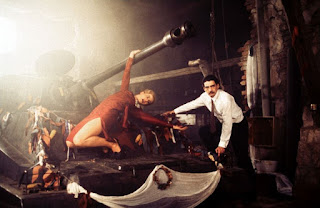 The Kino Lorber release spans over 3 discs of the film, in both the theatrical and 6 hour television cut of the film, coupled with a mass of bonus features such as various interviews with key cast and crews members as well as the Shooting Days (1996) documentary that treks the making of the film, makes this a must have release for fans of this internationally praised classics.

In the end I feel extremely mixed on my feelings towards Underground. No doubt it is an important film and a controversial one at that, and while I liked certain elements and some of the weirder ideas it explored, such as Blacky's weird fetish with his partner's highheel being smacked off of his forehead, I feel as if I missed what it was doing. To say it's the film's fault may not be true in this case, and as I write this, I can't help but want to visit that longer cut. Again, I enjoyed the journey overall and was very entertained but I didn't walk away with much more than that. I say definitely see it and judge for yourself. Most consider it a masterpiece.