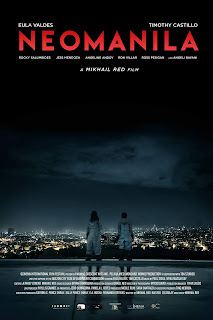 Being only his third feature, with a ripe 25 years of life under his belt, Mikhail Red is quickly making his name as one of the hottest Asian filmmakers to look out for, particularly with his previous work, Birdshot, being selected as The Philippines entry to last year's Oscar's Foreign Language competition. Young, yes, but there is no doubt that Red is a cinematic force to be reckoned with, and there is no question in my mind that if Neomanila is presented to the right set of eyeballs, it is bound to become an international hit. Going toe-to-toe with the giant industry known for cranking out the best modern thrillers, South Korea, Red and his crew crafts one of the finest thrillers to emerge out of Asia in many years.

A teenage boy named Toto is brought under the wing of a woman called Irma, the leader of a notorious death squad. These two unlikely partners form a familial bond together, but things begin to go awry when one of the planned targets strikes a deep chord within a particular someone. No spoilers, but what plays out here is a neon drenched Manila with its key players not being drowned out by the waves of locals. I enjoy Pinoy cinema, but more often than not the people in the background become a character themselves. It usually works, but here in the same surroundings they seem as if they are faded by the few select characters who we get a sharp focus on throughout the entirety of the journey.


Neomanila truly fires on all cylinders: pacing, visually, and the eerie and memorable score that all emphasize the wondrous performances and chemistry between Toto and Irma. Their mother and son relationship that forms between her while making a killer in the young boy, while hard to watch at times, truly brings a unique dynamic to a relationship not typically explored in this type of movie. I was more than on one occasion blown away by both performers and the Toto character reminded me of teenage version of Julian from Norte, End of History in terms of a powerhouse delivery.

As mentioned, if given the right opportunity, I could see this one playing to a larger crowd in the West in addition to Asia, where it is seeming to do quite well on well festival circuit. Fingers crossed someone gives this one a proper release and wider circulation as many movie goers will want to take a ride with this one. As Filipino cinema isn't widely recognized nowadays, I think an appropriate point of comparison would be Erik Matti's On the Job, in terms of the level of craftsmanship and entertainment factor.


If you are attending the Osaka Asian Film Festival and have only one film you can attend then Neomanila is a safe bet on walking away from the screen completely satisfied. Covering a different genre with decent success each time, Mikhail Red may be akin to being the next Kim Jee-woon, known for a similar variety and strong track record. I can spew praise for this dark and thrilling work for more than people care to listen, but enough is enough, see it if given the opportunity.