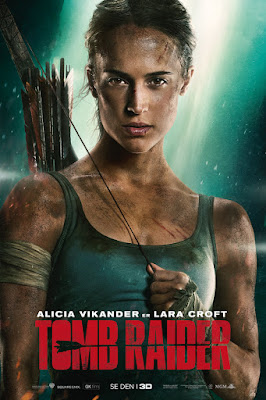 As a long, long time fan of the game franchise, when Tomb Raider was rebooted for a much more serious, brutal, and darker game, it was a refreshing change of modernization for the games and it embraced a cinematic and emotional quality that could be translated to film. The original Tomb Raider films are silly fun, hardly anything worth noting outside of that, but a film version of this latest game reboot should be a fairly easy adaption, right? Judging by this latest attempt at jump starting a blockbuster franchise, it’s not. Tomb Raider is a rather lifeless spin on the classic character and series, failing to resonate on any level beyond mild curiosity, and simply goes through the motions of what some mid-level corporate entity thinks an audience wants from a watered-down adaption of Tomb Raider. There are moments where the film shows its potential, but most of those are hammered into the trailers and the film fails to utilizes some of its more interesting aspects. It’s not a bad film, not on the surface, but it’s a film that’s so bland that it will easily be forgotten within weeks or months past its initial release.

On paper, this latest Tomb Raider seems like a legitimate reboot/modernization of the character. Hiring Alicia Vikander also seems like a decent choice too, one that will appeal both to young audiences and those more fine-tuned with her cinematic feats in more artsy films. Yet, as the film starts to play out, it’s obvious that it feels much safer than it should have and the results come across as a watered down and formulaic approach. You know the film is going to have issues when the first act, which features the youthful bike courier and rebellious Lara Croft who can’t pay her bills, does MMA, and gets into ridiculous bike races all the while flashbacks of her father play out, is the best part of the film. Still, as it plays out in all of its predictable manners, the film only loses momentum as it goes and by the time that Croft and her trusty drunk sidekick, played by the always reliable Daniel Wu is viciously underused here, the film feels more like a knock off than its own franchise worthy material.

Most of the issues in the second and third acts come from the Tomb Raider’s inability to connect with its audience. Lara, unlike in the rebooted game, almost feels untouchable as a heroine and her gravity defying feats of just leaping around on stuff and pinpoint accuracy with a bow feel more superhuman than a character defining herself through struggle. By the time the film’s villain is introduced, again another horrifyingly underused character and actor Walton Goggins, the audience doesn’t really fear him because it’s quite obvious that, even with the film dragging out the sequence of events, that he doesn’t stand a chance.

Beyond all of the issues with the plodding formulaic narrative, squandered emotional core, and repeated series of actors that are given nothing to work with, there are moments in Tomb Raider where one can see the potential. The film uses its supernatural elements, a key part of the original game series, in a manner that works with the new tone and the casting, despite having everyone underutilized, is fantastic. Director Roar Uthaug (who directed one of the great underrated foreign slashers Cold Prey) has a knack for some great visuals and key moments, including the moment where Lara has to leap from the ship during the storm that was maximized in the trailers and marketing, but like most of the cast, his style and ability to craft tension is undercut by generic scripting and problematic narrative structure. Even when the film hits those moments, it’s hard to gain momentum when the rest of the film is working against them.

Fans of the games, fans of the original films, and new fans will generally all find themselves wondering just what this latest Tomb Raider film was intending for its audience. In its attempts to reboot the franchise and embrace the new more realistic and less cheesy elements, the film waters everything down into a bland and unmemorable experience. For a series that was always based on an identity, even if it was an Indiana Jones meets James Bond kind of concept, this film doesn’t have one and it’s massively disappointing. Tomb Raider isn’t bad, it’s just bland.

Written By Matt Reifschneider
Posted by DarkReif at 5:16 PM