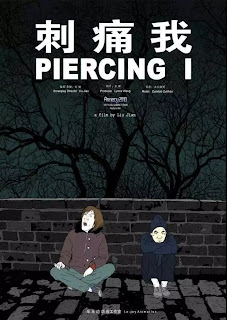 Being dubbed as China's first foray into animation for a feature film, naturally director Liu Jian should have immediately drawn in quite the curious crowd with his directorial debut, but I never recall hearing anything of this film, though that could solely have been me living in the shadows, but I digress. Regardless, the debut at hand is the 2010 drama, Piercing I, a bleak and harrowing tale of a corrupt youth being drawn into the cesspool of a shady businessman, though I use that professional term lightly, and an equally corrupt cop as they all do whatever slimy deed they must for the almighty root of all evil, money.

I don't want to get into the specifics of the story or plotline here, but this animated piece is one of the finest of its kind, from anywhere in Asia, going toe to toe with even some of the greats from Japan. Director Liu has crafted his own unique aesthetic that perfectly encapsulates the world he is building and proves a sad reflection of many of his own fellow Chinese. Though I haven't looked into it myself, I have no doubt in my mind that this film was immediately banned in its motherland, given its sharp political observations and expressions of a broken society, especially the magnifying glass over an unjust enforcer of the law in specific. 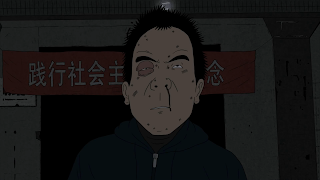 To say enjoyment is felt in a viewing experience this nature would be a disservice to the film and its message. It is a cold, dark and slow burn that creeps its brutal truth into your mind, not to leave its spot anytime soon. Some may not like the unnerving tone of this film, but for fans of the animated works by Yeon Sang-ho, a Korean director who may have been inspired by this film when making his lauded King of Pigs, then you will know what you are in for and even then, the ride is still a depressing one with that in mind.

Visually the film is a work of art all its own, calling to mind the animation of the aforementioned filmmaker with the color pallete of Waltz with Bashir, albeit a wee bit more muted overall. The way it moves and the design of the background, of which are a stellar quality, converging into a motion comic, but a bit livelier than the format is known for. Some may findit off-putting, spoiled by the buttery smooth frames of a Hayao Miyazaki masterwork, but the ones seeking different will find plenty to latch onto here. 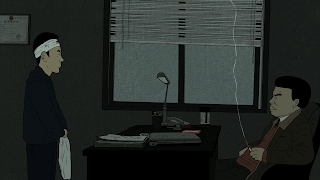 To say I was impressed by Liu Jian's first work is a vast understatement, but the film isn't without its flaws. At times, the budgetary constraints show, especially in the quality of the voice acting. Not the performers themselves being the problem whatsoever, I was even in more admiration of the director when I noticed his name displayed in the end credits as the voice of our lead character. Rather the sound recording quality itself wasn't as crisp as it should have been at times, with the dialogue being a bit muffled or too loud at moments, surpassing the threshold of the equipment they used's capabilities. Regardless, the complaints are mostly nitpicking, with the others not even worth mentioning.

If you are looking for something different and something that packs a punch that comes out of China, then look no further. Piercing I promises a great director to come from a place that has essentially no animated features to speak of, and what an artist to potentially usher in a new wave of like-minded people. I eagerly await an opportunity to see his newest work, Have a Nice Day. It gets my absolute highest recommendation.