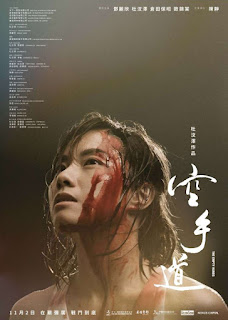 One of my absolute favorite guys in Hong Kong, funny man (typically) Chapman To, continues his directing career with his sophomore effort, the karate focused arthouse drama, The Empty Hands, an uneven but ultimately satisfactory film about a downtrodden woman who rises back to strength through her martial arts outlet after her father (Kurata) passes away and an estranged man (To) shows up to challenge her in ways she never expected.

Right off the bat, to shine on the positives, The Empty Hands has a lot going for it: martial arts, sleek cinematography, a very unique sounding score throughout, and a very strong performance by Stephy Tang, who will win over some naysayers after this one. I really enjoyed (most) of Chapman To's direction and choices, but where the film shines more or less it also fails in the same departments: overstated symbolic shots, melodramtic orchestral swellng to sell emotionl beats and a few cartoonish acting bits throw this one off-kilter too many times to count. 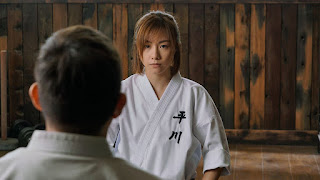 It is sort of mind boggling to see the film show such skill in craft while simultaneously being jarred by some amateurish editing and fight choreography. In the same fight scene, I'd be wowed one moment and shake my head in embarrasment the next. It was a really odd mixed feeling felt througout the entirety of its short ninety minute runtime. I felt is if I knew as much about the characters as I did as little as well. Again, it's good, but so up and down with its quality.

Another great performance is by Yasuaki Kurata, who is able to deliver his entire performance in Japanese, as he is Japanese and the character of Stephy's is of Japanese ethnicity in the movie. The two shared some truly quiet and beautiful moments together. I also really enjoyed the element of karate and how serious the film took its philosophy, although a much better film on such a topic comes to mind, but that is for another discussion. 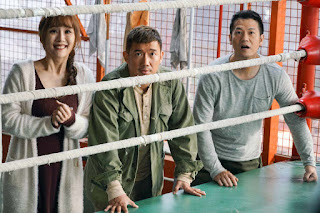 Ultimately The Empty Hands left me feeling mixed as I repeat myself here, but I did enjoy my time with the film. I think it could have used a little better craft and the screenplay could've been fleshed out to a stronger degree, but where it stands, the movie falls a little more than it stands and that's a real shame. I am still quite excited to see where To goes next as a filmmaker, as he most certainly has the potential to be great.