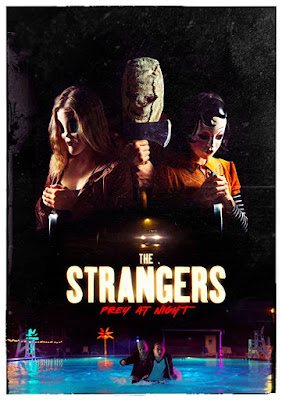 The first The Strangers film has become something of a modern horror icon film. Its heavy, nihilistic, stripped down, gritty, and realistic approach to the home invasion flick has lasted the test of time, solidifying the film as a cult classic. Ten years later, the sequel seems to be a bit too little too late in concept because, while The Strangers remains a cult film, it’s not one that remains in the mainstream consciousness. Still, being that the film is directed by Johannes Roberts (the gentleman that gave us the suffocating direction for 47 Meters Down) and seemed to sport a very different look, I was intrigued. Even with tempered expectations, it’s easy to see why many critics gave it poor reviews. However, I am going to stand on the other side of this see-saw with my opinion. I had a damn blast with The Strangers: Prey at Night. Sure, the film has a mediocre to terrible script, but Johannes and entire cast/crew seem to be having the time of their life making an old school slasher. For that, I will handedly admit that I sincerely enjoyed the hell out of Prey at Night.

Now, I did mention that the original The Strangers is heavy, nihilistic, stripped down, gritty, and realistic. The Strangers: Prey at Night is the exact opposite of all of those. Every one. Tonally, Prey at Night is much more akin to the slashers of the late 70s and early 80s, punctuated by the pop soundtrack used as juxtaposition (and in black humor) to the events happening on screen, than it is the low key, subtle, and atmospheric film that the original maximizes as a stylistic approach. This is easily where Prey at Night succeeds though. If you can’t outdo the original in its approach, go for a different direction. This film loves to use the visual style of decades gone, particularly in the use of the camera movement, zooms, and editing of the film and there is this wonderful mixture of style that Roberts uses that feels a bit like John Carpenter mixed with Italian 70s horror meets low budget slasher classics like The Town that Dreaded Sundown. At times, the film sacrifices logic for the sake of its outlandish visual style or key moments, particularly in the third act as the beat up pick up truck driven by the villains becomes its own weapon, but when it works it works so impressively that the issues of its continuity or logic only add to the style.

With that being said, The Strangers: Prey at Night is a stylish and highly entertaining slasher built on rocky foundations. The script underneath the film is patchy and predictable at best and eye rolling at worst. The main characters, a family that is having issues with their teen daughter and are on their way to take her to boarding school, are cliché for most of the film and Prey at Night doesn’t do a lot to truly cut them as realistic beyond caricatures. Their decisions are often head scratching for most of the first half and the film has no real intention of spending a lot of time with them outside of what’s required to get the audience invested in their survival. The performances are fine, although occasionally it’s not obvious whether or not the cast is hamming things up or not, but with what they are given it’s not like there is a lot to work with. This is where it’s easy to see why many critics and fans have issues with this film.

Still, despite those obvious flaws and the very problematic script, The Strangers: Prey at Night is saved by director Johannes Roberts as he makes the film a massive love letter to the slasher genre. Some of it is obvious, like using the Dead Zone inspired font for the title card or having the trailer park of its setting be set at Gatlin Lake, but often his use of style in the visuals, the long pans and zooms, and the color scheme of the pool sequence along with the mixed style of score makes this film one of my favorite films I’ve seen in theaters for the sheer fun of it. It’s hardly perfect, but in its imperfections, it may exemplify the slasher genre as a whole with its love letter approach to the genre. It’s almost NOTHING like the original, but then again, it’s probably for the best. Go in with tempered expectations, but have fun with The Strangers: Prey at Night and enjoy it for what it is.