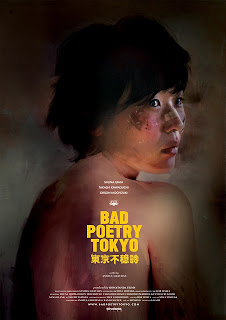 Bad Poetry Tokyo is a somewhat obscure project that only came to my attention when a Facebook page suggestion popped up in my feed, saying that a friend has liked 'Bad Poetry Tokyo'. With virtually no interest I clicked out of boredom and found myself suddenly very curious about the film due to the constant updates and intriguing behind the scenes stills leading up to its premiere at another festival. When I realized I would be covering the film, I found my excitement peaking. What followed was a 2 hour masterfully shot and executed mental beatdown at the hands of first time director, Anshul Chauhan. With only a handful of short works under his belt, I was completely taken aback by the sheer craft and thought put on display here.

Jun is a bar hostess in Tokyo who lets men do as they ever so disgustingly please to her, so she can fill her purse with enough cash to depart Japan and head to the States, in dreams of pursuing an acting career. Naturally the subject matter is disturbing to watch and what happens throughout the course of the film is an unnerving and brutally honest examination of a broken woman with no escape from her dark world. It gets into bad seed and the fate of those born into such horrible conditions. It's very bleak and more often than not hopeless, but Bad Poetry Tokyo holds nothing back from the viewer and places them right in the midst of the chaos. That said, it does manage to develop its characters that come and go and there are a few rays of sunshine to be found here. 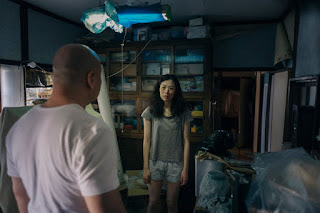 The whole aesthetic and visual language of Bad Poetry Tokyo is perfect from first frame to last. Every shot composition, the framing, lighting, the 4:3 aspect ratio chosen to emphasize the up close and personal dismay of its subjects, and even the perfectly chosen moments of handheld work all culminate into perhaps the finest thought-provoking display of a character and their psychology since Koji Fukada's equally masterful Harmonium. I am completely in awe by its depth and beauty even against such a dark backdrop.

Perfomances are strong all across the board, but Shuna Iijima knocks out of the park as Jun, a woman broken and torn down by her surroundings since birth, and the neverending desire to escape the hell she was born into shows in her every gesture and eye movement. She does a lot by showing very little. Her outbursts, which do happen here and there are heartwrenching and once more, hard to watch. Jun is a character of redemption, but her road is not paved in same manner as most. 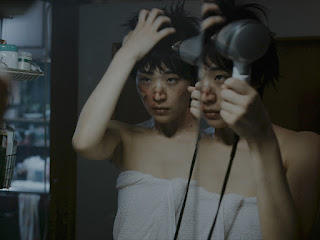 Takashi Kawaguchi, as the childhood friend whom rekindles an old flame in Jun, is the other performance highlight. His sweet nature and caring toward Jun eases some of the harsh tension the movie builds on from the start. A sort of carefree man, his breeziness and passion toward life is a great beacon of hope, something otherwise lost in the eyes of many here. I won't spoil but some of my favorite moments happen during the scenes with him. Things don't go into spoiler territory here, so no worries, but it was refreshing.

I think it is fairly obvious I enjoyed Bad Poetry Tokyo. I would go as far as to say I love it. Additional viewings will help cement my thoughts a little more firmly towards an ultimate conclusion in the long run, this initial experience is easily my favorite cinematic discovery of 2018, and I believe it is a modern masterpiece just waiting to find its audience.