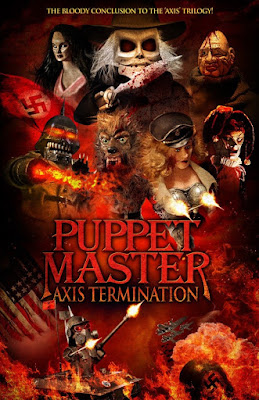 It is hard to believe that Charles Band’s Puppet Master Franchise has made it to Part 11 (not including the spin-off tie-in flick Puppet Master vs. Demonic Toys). This means it is officially the longest running horror franchise of all time… that is if you don’t count the Friday the 13th spin-off film Freddy vs. Jason and the Friday the 13th remake as well as the dreaded Witchcraft series which is more softcore porn than horror. Is the Puppet Master franchise worthy of such a coveted record? That would be a big HELL NO from me. Sure, the franchise was fun the beginning, but it has been mostly downhill since Part 5 with it hitting rock bottom with the clip-show insult eighth entry hiding under the title Puppet Master: The Legacy. It has been an ever slow uphill battle from that tar pit since. Hell, even my last review for Puppet Master X was positively negative, if that makes any sense. It was still bad, but it was a step in the right direction of trying desperately to grasp any of the old nostalgic fun of the Full Moon brand of yesteryear. Sadly, the same cannot be said about Puppet Master: Axis Termination, the supposed end to the “axis” story arc that began but the ninth film, as this is easily the worst since the… shutter… clip show entry.

Beginning directly after the cliffhanger ending of Part 10, Band, in true Full Moon sequel fashion, kills off or disposes of our heroes from the last film due to scheduling conflicts or not being able to afford the actors again. We are then introduced to a new army sergeant that has to team up with a supernatural midget (we are talking about Charles Band here, the man obsessed with small things) and some voodoo witches to take on some Nazis obsessed with the supernatural. Did I forget to mention that the puppets somehow come into play?

Now the last two entries were cheap, but this is a whole new step down in quality. The look of this flick is one step up from a homemade movie, not even B grade material. I’m talking D grade material here with poor direction, poor set design, poor writing and even more awful acting. Band tries to hide the lack of funds by bathing the film in colorful lighting but it only rallies the old saying of “polishing a turd” in the looks department. As for the plot… it is everywhere. There is so much shit going on that one can’t follow it at all when it’s laced with garbage dialogue… and trust me there’s a lot in its overly talky runtime… one just becomes apathetic to the whole outcome.

Is there anything “good” about this sequel? Well… the characters are a little livelier than the past two entries. The puppet effects are also improved. Still a far cry from the stop motion effects of the original run of the series, but the inclusion of some green screen shots adds a lot to the stiff puppet effects. However, the Nazi villain puppets are never as threating as they should be (like the Totem from Parts 4 and 5). Albert Band also offers a nice new variation of his original score, which sadly has become rather tiresome after being re-used umpteen times in his mile-long franchise.

I am not going to lie, it was a chore sitting through the entire run time of this film, which only clocks in at a measly 1 hour and 20 mins. The cheapo look and overall lackluster aesthetic to the film evoked more sadness than entertainment. ‘Pathetic” is the best world I can find to describe this feeble entry. I said this many sequels ago, but it’s long overdue to put this franchise out to pasture. Band and company just do not have the funds anymore to make anything remotely entertaining, as shown by their current slim outcrop from the company. Hell even Puppet Master, Full Moon’s crowning franchise, had to resort to go-fund-me dollars to get this one financed. The fans donated and the result definitely looks like a fan made product. Perhaps the new Puppet Master remake, made by a different production company and currently titled Puppet Master: The Little Reich, will restore some much needed love and quality into the series, but I’m sure Charles Band will continue to milk his own franchise cow to his grave.

Bonus Rant: Continuity was a never a strong element to the franchise, but I was discernably disheartened by the ending to this film by not tying up a huge plot hole made by the ninth entry Axis of Evil. Axis of Evil is a sequel to the pre-title sequence of the original Puppet Master, in which the puppet trunk in Toulon’s motel room wall is removed from its hiding spot after his suicide. You would think the writers of this entry would find some way to put the trunk back into the hotel wall so the rest of the original film can take place? NOPE… that would be too much to ask from Full Moon.

Written By Eric Reifschneider
Posted by DarkReif at 10:42 PM