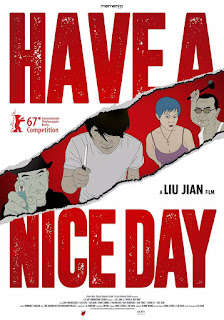 In 2010 director / writer / animator Liu Jian become the first filmmaker to create and unleash an animated feature from China upon the world, according to the internet. What resulted was a very dark debut feature film with a sharp social commentary and a bleak and unique animation style, Piercing I. While turning some heads during its initial festival run, both the film and its helmer, Liu Jian fell into an obscurity of sorts.

Seven (eight for U.S citizens) years later Liu returns with the highly anticipated follow-up animated feature, Have a Nice Day, a less dialogue heavy, more visually driven visceral experience that paints a similiar picture to its predecessor, this time his world inhabited by more vivid characters and a bit more budget and technical prowess resulting in a film that while a ride from start to finish, feels a little too familiar for its own good. 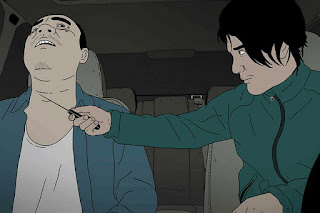 The short of the story is that a young man steals money from his older co-worker whilst riding in a car, via a knife hold up situation, as pictured above. The man warns him not to steal money from "Uncle" but he does not heed his warning and what follows is a myriad of characters that intertwine with one another, all finding themselves perpetuating towards this dufflebag full of piles of money. It's essentially a darkly comedic take on his previous plot, but it works.

As I said before, there is clearly a bigger budget and therefore a bigger polish to the image overall. The characters are more detailed and realistic looking, versus the sort of outlandish character design of the previous film, all beneficial towards recognition from a more traditional crowd. I see this playing to more people than Piercing I, and that is a good thing. It still has a clunkier animation style overall, at times sure to turn off some, but Liu Jian has a craft and style all his own and that deserves praise! 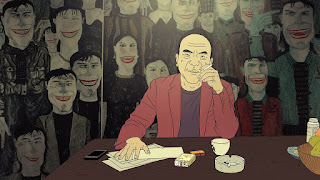 Overall, Have a Nice Day is a blast that builds towards a satisfactory showdown between its players, and without spoiling, as you see this confrontation coming from a mile away, it really is a great payoff that elevates the film out of its repetitive song and dance number. Also, the end credits are wonderul and complete with a catchy pop song that will get stuck in your head, not to mention the little background posters scattered throughout that help bridge Liu's worlds together. I enjoyed myself but I can't help in just wanting to revisit the previous film, even if more bleak and less exciting than this, I still found more to take away from that. Still fans and those unfamiliar should seek this unique piece of animated cinema out.