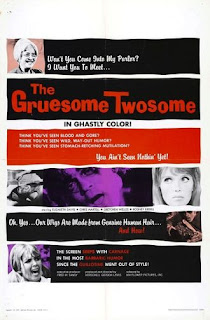 One of the bigger issues that can plague a horror comedy is how the genre lacks the insight to make them work TOGETHER. While The Gruesome Twosome might earn a few credits for being one of the first to attempt blending the two genres, it doesn't necessarily do them well. The film tends to have a funny scene, followed by a horror scene, followed by a funny scene, followed by a horror scene, etc. It doesn't do both at the same time. It just trades off on slapstick basic comedy and then HGL's brand of splatter horror. While there are moments that work, not all of them do and when they don't, like the opening sequence of two wigs talking to one another about the story that is about to unfold (?!), it fails miraculously. Not only that, but the film seems very hesitant to even work any deeper plot than the basics into the film to get those scenes to flow together outside of the specific moments.


In fact, The Gruesome Twosome has a weird tactic to spend way too long on specific sequences that have no impact on the plot or characters. There is a scene where the college girls listen to the radio dancing in their room eating KFC chicken that drags on. Is it supposed to be character development? If it is, then it fails. It happens again later when the main protagonists are on the beach and they proceed to kind of dick around drinking Cokes (HGL sells out to product placement?) that seems to have no rhyme or reason. Truthfully, I figured a straight up horror comedy would be a true knack for Lewis to use, but this film didn't work nearly as well as expected. So far as I dig through the box set, I have to admit that The Gruesome Twosome is one of the more disappointing films as it lacks a heart to match its zany antics. It has the right idea, but it's horrendously underwritten and under executed to pass it off. 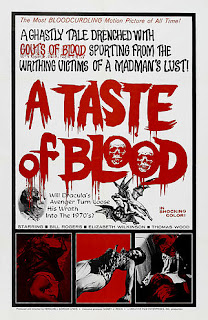 Who knew? Considering the hit or miss feelings I have had towards the films in this Herschell Gordon Lewis box set thus far (including the other film in this double review), I would never have guessed he would have tried to create effective characters and tension for one of his horror movies. He's known for the tongue in cheek splatter film formula, so when A Taste of Blood went for a slower build that tries to replicate the structures and tone of the classic Universal and Hammer films prior I was a bit taken back. It spends quite a bit of time establishing the characters in play and attempts to sell tension instead of gore as its selling point. The performances are half way decent, it's nice to have William Kerwin back who stole many of Lewis' eariler films, and the film wraps up a lot of its subplots even if it's quickly - another thing that Lewis is not necessarily prone to doing. Even at its bones, A Taste of Blood seems much more intent at crafting a whole movie which is quite respectable.

Occasionally the film can drag at times as Lewis seems unsure when to edit (a theme I keep coming back to as I start to think back to his other films) and it tends to bog the film down, but truthfully it's a change of pace that's worthy of a second look for fans of the director. It has just as many effective sequences as ones that don't work as well and that's an improvement in many ways over his earlier material. It might lack the manic energy that made some of his other better films so much fun, but this film might be his most well rounded and ambitious one so far in the set. Now, I'm kind of inspired to dig further into the next set of films.